Yes, Mykonos is really this lovely.

Here’s my salute to my favorite destination on the planet (so far). The history of Greece, the mythology, the epic poetry, and films about this ancient civilization have always captured my imagination. First, the fun stuff. Here are a few of my favorite films relating to Greece.

Do you remember special effects before computer generated imagery? Are you a Ray Harryhausen fan?

He learned a technique called “split-screen” (rear projection on overlapping miniature screens) to insert dinosaurs and other fantastic beasts into real-world backgrounds. 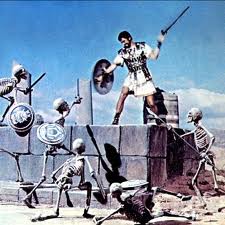 Jason and the Argonauts (1963) tells the adventure of Jason and his quest for the golden fleece. One of the most impressive stop animation sequences in the film was a fight between three actors and seven skeletons which took four months to complete. Because Harryhausen worked alone on his stop-motion animation sequences, the filming of these could often take as long as two years because Harryhausen often shot no more than 13 frames of film (one-half second of elapsed time) per day.

The recent remake of Clash of the Titans (2010) starring Sam Worthington, Liam Neesen, and Ralph Fiennes cashed in on CGI effects that were impressive. Still, I have an emotional bond with Ray’s version of the classic Greek story of Perseus. You know the story: Zeus turned into  golden flakes and showered himself upon an imprisoned Danae. When she discovered she was with child, her father locked her up in a bronze chamber and cast her out on the Aegean Sea. On a remote island, her son Perseus comes of age. With the help of Zeus, Perseus received three gifts from Olympus, an invisible helm, magical sword, and winged sandals. Perseus had the best side-kick ever, the winged horse Pegasus. Three witches, which influenced Shakespeare later on when he wrote Macbeth, showed Perseus how to defeat the beautiful/snakey-haired Gorgon, Medusa, and well, you know how it ended. However, it is the 1981 version with a heavy-hitter cast starring Laurence Olivier, Ursula Andress, Maggie Smith, Burgess Meredith, and Mark Hamill as Perseus that I prefer. It’s not that I don’t like CGI; it’s the patience required to execute stop animation that earns my respect. Seems to me CGI films place all their chips on the draw-dropping effect and little on the script. Call me old-fashioned, but I like films that have dialogue and dynamic characters. Leave the CGI in the closet. I’ll use my imagination.

Did you know this 8 Academy Award winning film including, Best Picture, Actor, and Director (George Cukor), was based on Greek mythology?

My Fair Lady (1964), was first a play called Pygmalion by George Bernard Shaw, then later adapted as a Lerner and Loewe stage musical. The story was based on Pygmalion, a mythical sculptor from Cyprus, who fell in love with a statue he created. 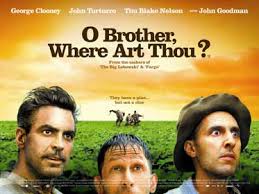 I have a lot of admiration for the Coen Brothers. Their 2000 film, O Brother Where Art Thou, is a satirical retelling of Homer’s Odyssey set in 1937, rural Mississippi. The film blends Christian references with Greek legends. For example, the river scene illustrates a baptismal celebration. The congregation also represent the Lotus Eaters, a group of Islanders who takes in travelers and feeds them a drugged lotus leaf that makes them forget all their troubles. Then, three provocative women at the river seduce the travelers. These are the mythical sirens who lure Ulysses and his sailors into ruin. Also, John Goodman is the Cyclops, while the wife of Ulysses, is Penny, short for Penelope, who waits twenty years for the return of her husband. I never tire viewing this film, especially at he end with the flooding. The tins of hair grease floating about are funny.  Oh, and the music. Ha! Great.

Troy (2004) had the cast, the classic story, the fight scenes–it seemed to have it all. 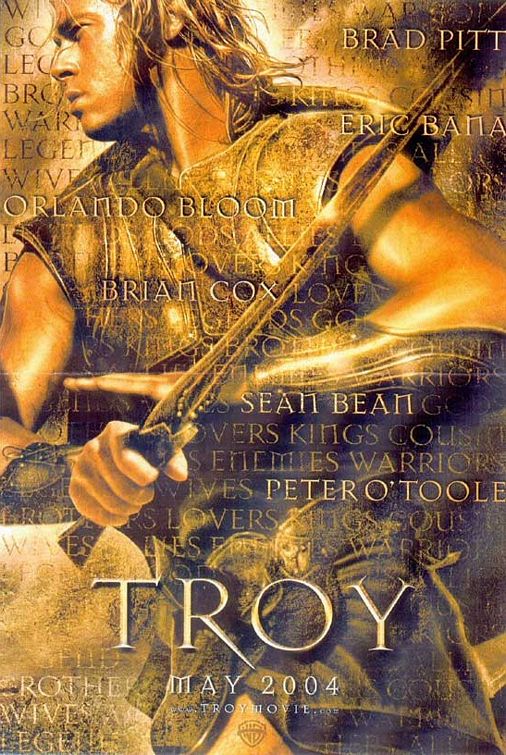 The face that launched a thousand ships. In 1250 B.C., the Trojan prince Paris persuades the Queen of Sparta to leave her husband, Menelaus, and sail with him back to Troy. After Menelaus finds out that his wife Helen was taken by the Trojans, he asks his brother Agamemnon to help him get her back. Agamemnon sees this as an opportunity for power. So they set off with 1,000 ships holding 50,000 Greeks to Troy. With the help of Achilles, the Greeks are able to fight the undefeated Trojans. 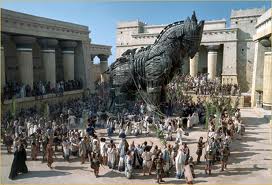 I loved the Trojan horse and the fire-ball fight scenes. I loved that Paris was weak and Hector strong. What a great cast. There was more than enough eye-candy for everyone–actors in shape, the exquisite costumes, the setting was beautiful. Much money was spent on the film. So why wasn’t it as good as Gladiator? It lacked a good score, for one thing. What do you think?

I died and went to heaven.

8 thoughts on “Greece: Ray Harryhausen and Mythical Films, Part I”