Vertigo vs. The Machinist

Which psychological thriller is better–Alfred Hitchcock’s Vertigo(1958) or Brad Anderson’s The Machinist (2004)?

Here are some ways in which they are similar.

In Hitchcock’s Vertigo, Jimmy Stewart plays the male protagonist, Scottie Ferguson, a nice man who has issues. Forced to retire early from the fraternal police force due to his disabilities, principally acrophobia and clinical depression, Scottie was recently released from a sanatorium at the film’s beginning. From his point of view the story is told, and the audience is left to lean upon the other character’s reaction to him for clues to find out what is real or a delusion.

Scottie is a respectable man. He is a public servant, a background-checked professional. He has Midge Wood, an ex-fiancee, a solid, decent woman who cares for him. He was also Jimmy Stewart. I can’t watch Scottie on screen and not feel compassion for the character because I take the residue of Stewart’s popular appeal with me to the viewing.

Christian Bale, who plays Trevor Reznik in The Machinist, hasn’t slept in a year. His physical demise is indicative of his mental trauma. For the role, Bale lost over 60 pounds and dropped down to 120 pounds. In the film, Trevor’s fraternal brothers at the factory used to like him when he drank and played cards with them. They wonder about his behavior and eventually ostracize him. Trevor’s landlady gives us a glimpse of Trevor’s goodness when she compliments him for being the model tenant. When Trevor interacts with others, like the waitress at the airport, you admire his politeness and sweet smile. He tips heavily and has done so every night for a year. Admirable, right?  The Machinist came out in 2004, one year before Batman Begins, but I think Christian Bale is a modern-day Stewart, able to bring integrity, expression, and sensitivity to any role, and I predict Bale will surpass his super-star status of today and reach legendary heights like Jimmy Stewart when enough years pass by.

How did Hitchcock create that “Vertigo-Effect”? The camera pulled away from the target while simultaneously zooming in, thereby creating the disturbing, off-balance sensation. Very unusual and exciting technique.

Both films are exercises in psychological states of being. Because you like the two protagonists, you’re willing to go with them, much like the amusement park’s fun house ride which becomes more disturbing as the motorized car turns around another bend. Scottie and Trevor were both fools. They were both misunderstood and confused. The resolutions to their crises leave no room for speculation, and I was glad. Not happy endings, but I was relieved their questions were answered.

In the end, both unreliable narrators are dangerous.

In The Machinist, I appreciated the Dostoyevsky references like Trevor reading The Idiot, a novel about a saintly, kind prince in 19th century Russia who becomes insane after the corrupting world abuses him. Another example is Trevor’s hallucination called Ivan, referencing the tormented middle brother visited by the devil in The Brothers Karamazov. Also, there’s the 666 ride in the fun house with the sign at the fork in the road that reads Crime and Punishment, all classics by Dostoyevsky who wrote about moral dilemmas and loved by the screenwriter, Scott Kosar. 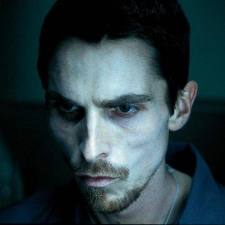 One big factor for deciding which thriller is better is how you view Christian Bale’s extreme weight loss. As a tortured soul, his body mirrored his mind. To see him looking like a walking corpse–was it distracting or did it bring an authenticity to the role? We all know method actors who will do anything to become their characters. Could the story have been told if Bale had been at a normal weight? Or does the mirroring of torture make the movie more thrilling? Which do you think is a better psychological thriller?

18 Comments on “Vertigo vs. The Machinist”