In 1998, the German foreign film, Lola Rennt, a philosophical, crime thriller debuted and received many accolades including the Audience Award at the Sundance Film Festival. Tom Tykwer is the man. He wrote the script, directed it, and created the fabulous techno score.

The story is about Lola, played by Franka Potente, who must find 100,000 Deutschmarks in twenty minutes to save the life of her boyfriend Manni.

Lola, through determination, alters the course of her life though sheer will exercised when she screams and literally stops time. Through a series of three runs, the story shows Lola in three scenarios. When she bumps into someone, a series of snap shots show the person’s history. It’s the Butterfly Effect in action. 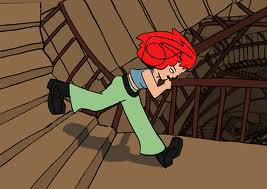 The film uses animation to mark the beginning of a new “run” and encompasses new techniques in cinematography in 1998 with stop action, manipulation of time and space via camera speeds and altering black and white with color to signify present and past time.

The score plays a large role in the film by the heart-beating, score which compliments the running and the stop action of the shots. The result is a pulsating, fast, frenetic experience.

Look for the blind woman, the motif of the clock, and the bum on the train.

This is one foreign film that’s easy to watch and yet has you thinking about the philosophical question it presents.