I’m glad to partake in the Robert DeNiro blogathan hosted by Tyson and Mark. My job was to pick a DeNiro film I hadn’t seen and give a brief review. I focused on the 2007 film, Stardust.

The British fantasy-romance-adventure film included all the elements one would expect from a fantasy and with great special effects, it was as charming as The Princess Bride or The Golden Compass.  From Claire Danes as the fallen star to Mark Strong as a scheming prince to Michelle Pfeiffer as the wicked witch, everyone played their roles convincingly except for, I’m sorry to report, Robert DeNiro. I never thought I’d admit he was the weak link in the chain.

Robert DeNiro’s character was a confused pirate, Captain Shakespeare. One minute he’s the tough guy you’d expect DeNiro to play when he kidnaps the pair and brings Tristan and the fallen star, Yvaine, on board his flying pirate ship. The hero, Tristan, played by Charlie Cox, crossed into the fantasy world called Stormhold and falls in love with the fallen star who shines brighter and brighter as her love grows for Tristan. 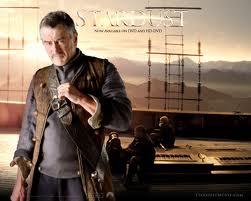 As Captain Shakespeare, he mimicked the dramatist by accentuating the effeminacy. Then he  added the can-can routine and the audience was privy to transvestite tendencies.  Seeing DeNiro in drag was not funny. His interpretation was a muddled mess.

Oh, Robert DeNiro, if I could have reviewed twenty other films of yours that showed your brilliance. You were more offensive in this role than any other time you beat someone to death with whatever prop was handy. Goodness, what were you thinking? 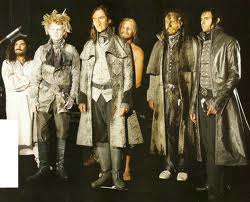 What did work in the film were the dead brothers on the sideline watching as ghosts.  They were funny and the technique clever. 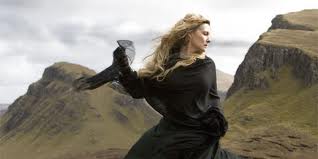 Michelle Pfeiffer was great as Lamia, the wicked witch in this story. The make-up was great. It was disturbing to see the beautiful legend turn hideous. Ouch.

Stardust was a commercial success and kept me interested for the most part. I would rate the film 7 out of 10 under one condition: Bobby never agrees to play a transvestite pirate again.

← Five Shots: Red Maples in the Desert
That Male Voice in Film: Your Favorite? →