Errol Morris’s documentary, The Fog of War (2004) is a profound achievement showcasing one of the more controversial figures in United States history, former Secretary of Defense Robert McNamara.

As top adviser under President Kennedy and President Johnson, McNamara’s influence behind the decision-making process such as the bombing of Tokyo, The Cuban Missile Crisis, and the Vietnam War cannot be overestimated.

He provides insights as a political figure reflecting upon the ghosts of his past and reviewing his amazing life. It’s not a romanticization of him. He is trying hard to give the facts, and his sharp intellect is persuasive. There’s a tenderness in his eyes, an elderly man talking to you with wisdom, and he wants to share his experiences to influence today ’s society. He seems to want to come to terms with his volatile life, to have the last word. 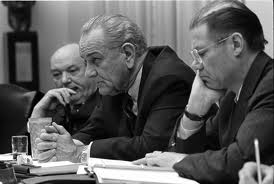 In charge of military logistics and intelligence for the Pentagon, his importance and power was second to the President.  Hated for involving the U.S. people in Vietnam and blamed by many for extending troop involvement in the late 60s. He was there advising Kennedy over the Cuban Missile Crisis. 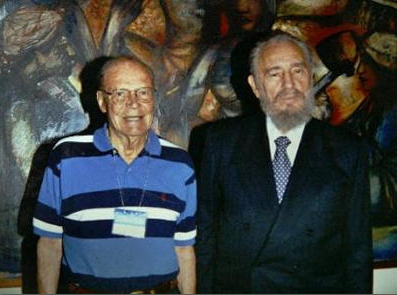 Educated at Berkeley and Harvard, he helped rebuild Ford Motor Company as the only president outside of the Ford family to maximize profits before he was hand-picked by Kennedy to be his Secretary of Defense. After his time in Washington as Secretary of Defense, he served as President of the World Bank from 1968 – 1981.

Robert McNamara died in 2009 at the age of 93. Why should you watch this documentary? The opportunity to hear the perspective from a  man whose brilliant intelligence finally catches up with empathetic wisdom. McNamara will tell you that war is a foggy place with no clear lines. He empathizes. He admits guilt. He forewarns. It’s a confession no one can afford to miss–especially those in power today. Can we learn from the past? Hear it from the man himself and be your own judge.

I’m surprised there hasn’t been a biopic about the man.

7 thoughts on “History in Films: Fog of War”