As a disciple of Steven Spielberg, director/writer/producer Robert Zemeckis’s best efforts star Tom Hanks with films like Castaway(2000), Forrest Gump (won Best Director at the Oscars in 1994), and The Polar Express (2004). His commercial success of the 80s Back to the Future series and recently, Flight (2012) with Denzel Washington, have made him a loud voice in Hollywood. I’d like to focus on his 2007, computer animated fantasy, Beowulf. What’s good and what isn’t?

One cannot escape the most basic of all stories—the concept of the hero. Cultures around the world have their own version. In the Western tradition, whether the hero be from Greek legends, like Perseus, or the Spartans, the knights, Robin Hood, Superman, or Luke Skywalker, the hero who defies Gods, monsters, and villains to save family, kingdom, and the world is a timeless genre. We love it when good triumphs over evil.

Remember when you were in school and sat in a British Literature class? You were exposed to the (800-1100 A.D.) Anglo-Saxon epic poem, Beowulf.

Do you remember the plot? Maybe you looked it up on Spark-notes: “King Hrothgar of Denmark builds a great mead-hall, called Herot, where his warriors can gather to drink, receive gifts from their lord, and listen to stories sung by the bards. But the jubilant noise from Herot angers Grendel, a horrible demon who lives in the swamplands of Hrothgar’s kingdom. Grendel terrorizes the Danes every night, killing them and defeating their efforts to fight back. The Danes suffer many years of fear, danger, and death at the hands of Grendel. Eventually, however, a young Geatish warrior named Beowulf hears of Hrothgar’s plight. Inspired by the challenge, Beowulf sails to Denmark with a small company of men, determined to defeat Grendel. When Beowulf is an old man, however, a thief disturbs a barrow, or mound, where a great dragon lies guarding a horde of treasure. Enraged, the dragon emerges from the barrow and begins unleashing fiery destruction upon the Geats. Sensing his own death approaching, Beowulf goes to fight the dragon. With the aid of Wiglaf, he succeeds in killing the beast, but at a heavy cost. The dragon bites Beowulf in the neck, and its fiery venom kills him moments after their encounter. The Geats fear that their enemies will attack them now that Beowulf is dead. According to Beowulf’s wishes, they burn their departed king’s body on a huge funeral pyre and then bury him with a massive treasure in a barrow overlooking the sea.”

As a teacher, the PG-13, 2007 film version has potential for hooking students. If the students find the visual accompaniment interesting, then chances are they will slog through the written text. Whatever it takes to get them interested.

So here comes this film starring bad-boy Brit, Ray Winstone, as Beowulf. They loved him as the thug in The Departed (2006) or as the loveable pagan in Arthur (2011). The film also stars Anthony Hopkins as Hrothgar. Princess Buttercup resurfaces as the disappointed Wealthow. John Malkovich is the surly Christian, Unferth, and one of my favorite supporting character actors, Brendon Gleeson, (Did you see him in the dark comedy In Bruges? ) is the sidekick to Beowulf. But the major star attraction is  Angelina Jolie as Grendel’s mother.

Wait! I thought she was a swamp hag? Not in this version. I thought I was watching Sin City. Very sexy for PG-13. Her golden body too perfect, her breasts so high, I wondered if she were going to swallow them when she opened her mouth. Too many of my favorite actors starred in this film–forget for a moment about my students. I wanted to love the film. Should I show this sexy, visual version of the epic tale in class or not? You tell me. 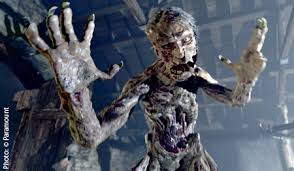 What was good about it? GRENDEL the monster! He was perfect. Just human enough to feel empathy for him. Grendel’s hyper-sensitivity for sound established the motivation for why he attacked Herot. The party was just too loud. I get it. He was an unfortunate, misunderstood social outcast. The computer generated figurine was perfect—just as you cared for Smeegles, in The Lord of the Rings, you sympathized with Grendel.

When the naked Beowulf teared off his arm, I felt for the creature.

I really don’t know what to say about the sexy alteration of the “swamp hag” into the golden temptress, Angelina Jolie. To have her rise out of the water wearing stiletto’s was ridiculous. She seduced Beowulf because she appealed to his vanity and greed, and their liaison produced a dragon-son who ultimately brought about Beowulf’s demise. I did appreciate the script incorporating Germanic, Old English words and Jolie did give a credible accent.

Beowulf’s boast, Grendel, and the dragon fight made the film worth the watch. The flux between Christianity and Odin was fine. The mead drinking, belching, boorish behavior of the warriors was predictable. The chant sung by Beowulf’s warriors which sounded like a naughty limerick had me smiling. 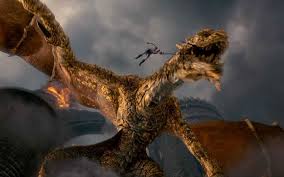 Still, there’s more to like about the film than dislike.