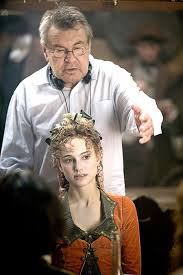 It’s a shame when you have great actors, a vibrant, volatile history to wrap a script around, an accomplished director, Milo Forman (One Flew Over the Cuckoo’s Nest, Amadeus, The People vs. Larry Flint) and the film is far from captivating. You resign yourself to the fact that the central flaw of the film is a poor script. That’s how I would describe Milo Forman’s 2006 film, Goya’s Ghosts.

The historical setting of the Spanish Inquisition in 1792 is full of macabre stories of torture for those deemed sinners of the One True Faith. 300 years later, these horrifying stories of black cloaked fiends in the name of God are easy ingredients for creating a thrilling plot. Who better to play the fallen priest, Lorenzo, whose lust for the beautiful Inés (Natalie Portman) than Javier Bardem? No one.

Having Randy Quaid play Charles IV was an odd decision. Francisco Goya, played by Swedish actor Stellan Skarsgård, did a good job considering what little he had to work with. It was a flaw for the artist to have such a small role in the events of the film. I think if they had told the story from Goya’s perspective, it would have made more sense. As it were, the real ghost, the charismatic performance was totally Javier Bardem. And what of Natalie Portman?

Another fault of the film. She was two characters. Her sweet poor self who, put to the test, failed. She was observed not eating pork, thus signifying “Jewish tendencies” and put in prison for 15 years. When she comes out, she is a gnarly toothless hag; don’t worry, she returns ten minutes later as the daughter, a whore named Alicia–identical to her former self in beauty except she has the black hair of her father, Lorenzo. I just didn’t buy it.

All protagonists and antagonists need conflict to propel the plot. But when plots jump from one horrific event to the next without any mental or emotional grappling, characters become puppets and the script is stale. If only Goya’s work had been featured. He’s on the periphery barely reacting let alone telling the tale in his words. It wasn’t a terrible film, but when I can’t care for a character who is abused like Inés, then there’s a serious problem with the script. I’d watch it for Bardem’s acting, and that’s about it.

Oh, so the real Goya? Here are some of his famous pieces showing the glimmer of a horrifying age in Spain in late 1700s. 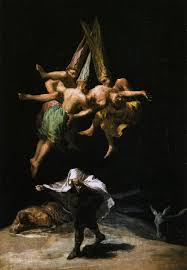 Not all of Francisco Goya’s art revealed the shadows and demons of the Spanish Inquisition or his famous Saturn Devouring His Son. He was a master at portraits, too, but I reckon that was my biggest disappointed with Goya’s Ghosts; I was anticipating the artist and his thoughts and impressions. The stories behind his visions would be a story worth telling.