I am drawn to the time period, 1880-1945. Mix in the eruptions and innovations with people struggling with their landscape and watch a dynamic story ensue. Who needs fiction when you hear about the incredulous stories of your grandparents? Inventions revved up time and a day sped forth into a year and another decade flew by.  After I read biographies, novels, or text books about people from this time, the message was clear: life was brief and unsympathetic. There was a lawlessness, a raw hunger in people. You can see this urgency in the characters of films and novels. 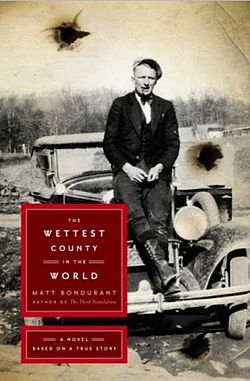 I revisited John Hillcoat’s historical film Lawless and was impressed with certain aspects of the film–the setting and story of the bootlegging brothers who reached for financial independence in Prohibition-era Virginia.  The true story comes from author Matt Bondurant’s novel The Wettest County in the World (2008) about his grandfather and two great-uncles as moonshine gangsters. The story spoke to me having lived only a short drive away from plot’s location, Franklin County, Virginia. I can attest these back-woods moonshiners existed (and still do) in pockets of Virginia today.  However, those that dislike violence might be put off with double barrel shotguns firing in all directions.The real reason you should watch the film is the acting by Jessica Chastain, Shia LaBeouf, Guy Pearce, and Tom Hardy. They make a great team and the film memorable.

Tom Hardy played the oldest brother, Forrest. He was larger than life in the county, a legend for beating back death when those around him perished. He embellished the attributes of my grandfather–chomping on a cigar, grunting more than talking; he was mean and tough. The character Forrest in Lawless was tough. How tough? Someone slit his throat from ear to ear and he took it like a man. While it seemed like an easy role to play–just slap a stony expression on your face for two hours–Tom Hardy brought to the surface a glow of tenderness. Unable to vocalize his affection for citified girl-on-the-run, Maggie Beauford, played by Jessica Chastain, his eyes and the way he grunted spoke volumes. Or maybe it was the way he used his brass knuckles that demanded respect from the rest of the community. Add to the film the solid acting performances by Gary Oldman and Mia Wasikowska and the awesome villain played by Guy Pearce. His role as the snobby, bureaucrat whose disdain for the mountain hicks was memorable due to the details. The gloves that kept his hands clean. The delight in himself while he ruthlessly wielded his power. His barely contained rage was downright evil. I was never so happy to see a villain get his comeuppance. 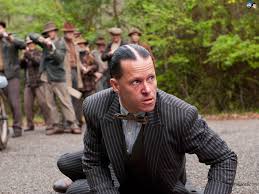 Lawless represented a historical setting of the late 20s, and I marveled throughout the film about the toughness of the characters. The violence depicted the hardness of the times. It’s not that the characters were models of morality and that I condone their lawlessness. The generation of my grandparents used their environment to help them carve out a living. They survived by making the best of their place in society. They followed their own laws to survive. I admire their survival instincts. I admire their toughness. The film tried to represent that element. It had its holes what with the romanization of the fight and the western-like feel of the show down. The guns missed their mark too many times for realism, but it was a film where the ensemble troupe outlasted the weaknesses of the film. I loved it.

26 thoughts on “History in Films: Lawless”