I’m a snob when it comes to James Bond, and I have my reasons why the franchise is at its best during the Connery years. First, if I ever have the means to visit Sweden, I’d have to visit the James Bond museum. Otherwise, there’s nothing better than the  007 Official Site where I pulled tidbits and details to add to my opinions. If you are a James Bond addict, then I highly recommend you look at Bond from statistician Derek Young’s perspective. Chance magazine–a statistical assessment of James Bond. It’s an in-depth analysis of the history behind the franchise. Why is Thunderball one of the better Bond films? There are traditional aspects one expects in a Bond film:

The Opening Song by a Star

If James Bond had a singing voice it would sound like Tom Jones. He’s Welsh, virile, and tall-dark-and-handsome. You could drive a truck through his vibrato. Composed by John Barry & Don Black, the opening song “Thunderball” described James Bond as ruthless when it came to seducing women and killing men. The lyrics may be lame, but the power of the twangy horn section and the robust pitch of Tom Jones’s voice was an oral eruption contributing to the sexiness factor of Thunderball. Want to know more about the songs of James Bond? Here’s an article worth visiting reelreactions J Bond songs . Tom Jones had to follow the sensational Shirley Bassey in Goldfinger (1964), considered by many as the best singing performance in Bond history. Apparently, Tom Jones passed out singing the last high note, but it was worth it for his career. Due in part to his association with the James Bond franchise, his popularity soared. From 1969-1971, Tom Jones was rewarded with his own variety show on television; the playboy performer collected panties thrown to him from admirers in the audience when he sang. 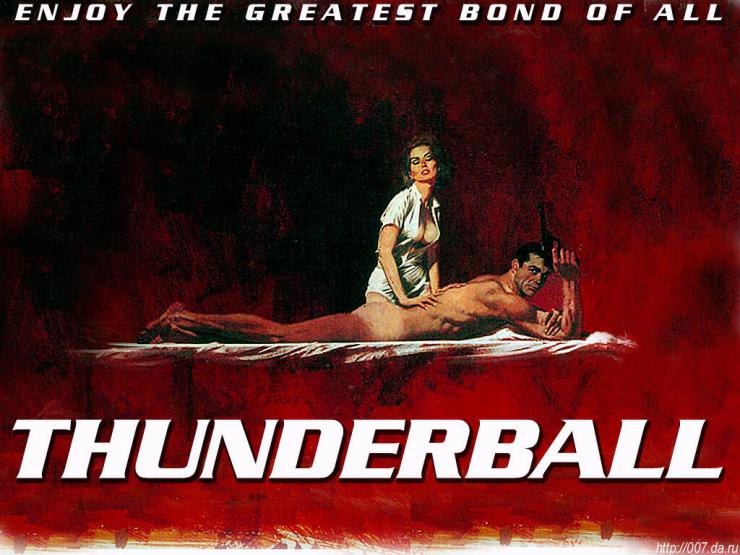 After fifty years and 23 Bond films, Sean Connery remains the best James Bond. In 1965, he was celebrating the height of his popularity for playing the spy. He defined the part. While other Bonds are prettier, Sean Connery exuded that  je-ne-sais-quoi. His wry smile and sex-appeal defined masculinity as much as any Bond-girl defined sexual femininity. Connery tapped into the James Bond machismo best, that is, Bond was the man who always conquered his foes and possessed any woman of his choosing with cool wit, high-class props, and an insatiable appetite. Thunderball was a very sexy film. From the opening song with the silhouette water nymphs to stunning Bond-girls, what a perfect location to film at the Bahamas where near-nudity is perfectly normal and everyone is as gorgeous as the climate. Also, this was the first Bond film to use wide-screen Panavision, too.  Let’s face it, Thunderball was an orgy of the senses, stirring the audience as if struck, well, by a thunderball. This all done and still rated PG. 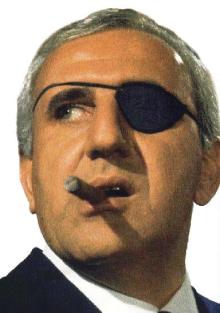 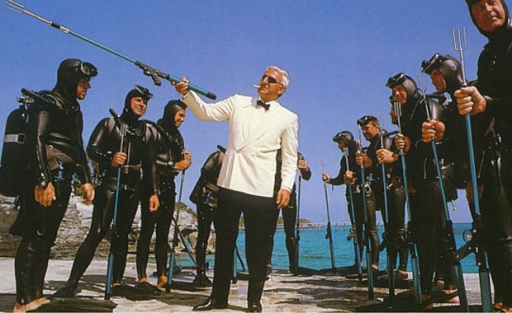 Antagonist Emilo Largo, played by Adolfo Celi, made good use of his granite face and strong chin to play the sinister villain who attempted to black mail the western world with two stolen atomic bombs.  There’s nothing like an eye-patch to toughen up a face. His wielded his power over his cronies in scuba gear with harpoon guns. I loved the concept of an underwater army. It’s rare to witness an underwater battle scene. There’s still plenty of cool gadgets and car chases and explosions for traditional thrill-seekers, but I appreciated the difficulty of filming the underwater sequence. Thunderball ranks up there as number seven with a score of 4 out of 5 shaken, not stirred martinis.