King Kong is in the public domain and a cherished icon. When the film first appeared in 1933, Willis O’Brien’s stop-motion effects were revolutionary. Is it possible for audiences today to feel the magic of the film experienced by a society that watched mesmerized, a society that paid a quarter to escape the Great Depression for a while?  Plots where beasts or beastly men attack the young and virtuous were popular then as of today. Men conquering foes and possessing their women have been retold throughout the ages. For 80 years, who could resist watching a giant gorilla swinging around the tip of the Empire State Building batting away planes trying to save himself and protect/reclaim Ann Darrow? There’s a charm to the beauty and the beast story. In the 1933 film version, Ann needs saving. Military planes and Driscoll save her from the beast. In the 1976 and 2005 versions, anthropomorphic changes emphasize human characteristics within the animal. Kong falls in love with Ann, and she learns to care for Kong; he evolves to cave man. Our empathy extends to the anti-hero who wins the heart of the girl and dies because of beauty. Either version, women aren’t portrayed in a favorable way. They are fragile toys, or they cause the death of the anti-hero. Anyway, filmmaker Merian Cooper conceived the character in 1933 after an Edgar Wallace draft; I’ve often wondered how inspired Cooper was by the 1917 World War I propaganda poster demonizing Germany? 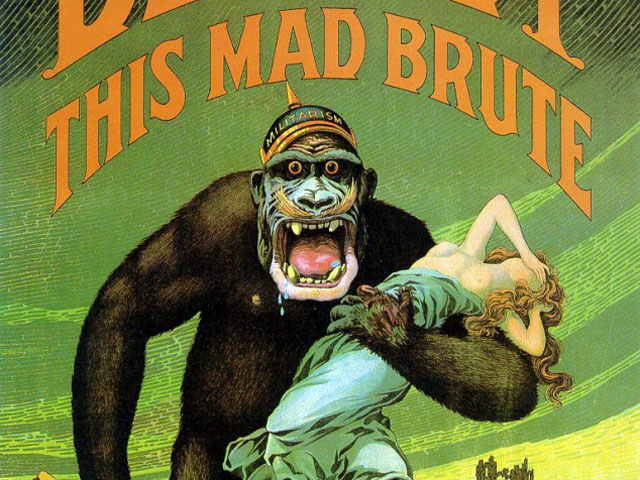 Through two world wars, the image of an enemy as a beast demolishing culture and society was an effective way to inspire patriotism for both Allies and Axis powers. King Kong became an extended metaphor used by many countries to rationalize visually the need to take up arms to save society. This factor adds a dimension to King Kong’s history.

Is Kong a ferocious beast or manipulated anti-hero? Fear and empathy are two powerful  ingredients in a concoction that have movie goers under the spell of the King of the Jungle for over 80 years.

Did you know that President Kennedy’s father, Joseph, co-founded RKO in 1928? One of the “Big Five” studios from the classic age, RKO studios had a twenty-year golden history establishing the early careers of Fred Astaire and Ginger Rogers, Katharine Hepburn, Robert Mitchum, and Cary Grant among others. RKO featured low-budget horror films and birthed the genre of film noir. The studio produced two famous films in motion picture history: King Kong and Citizen Kane as well as Frank Capra’s, It’s a Wonderful Life and Hitchcock’s, Notorious. Remember Scorsese’s, The Aviator? Howard Hughes funded his first two films and bought RKO in 1948 but it dwindled in stature in the late 1950s until it regained its bearings and survives today. Want to explore RKO’s history? I recommend the RKO site HERE .

Back to King Kong. I learned a lot about the film from Turner Classic Movie’s site. Check out TCM HERE

David O. Selznick 1931  hired director George Cukor and left after a year to work with father-in-law, Louis B. Mayer. Enter Merian Cooper as production head and his pet project King Kong. Cooper transformed the script to reality with the special effects work of Willis O’Brien. Selznick advocated for the creative expression of the director and not the factory system of production and is credited for the early success of the studio. Here’s a classic trailer to watch. I think every movie buff ought to see this classic. 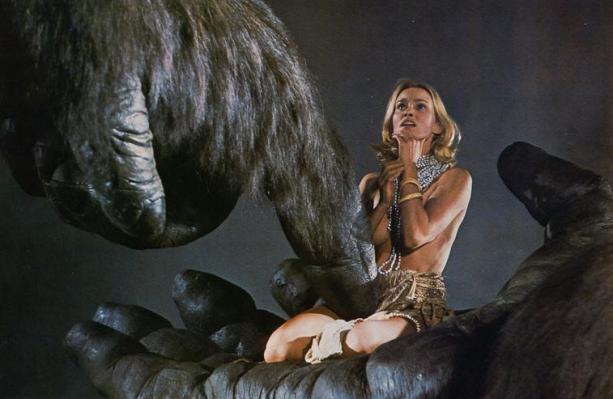 The only good thing about the 1976 version was it had Jeff Bridges with great hair. Jessica Lange as a drugged sex-slave did little to sustain my interest as a character. It wasn’t completely her fault. There was little in the script for her work with. The emphasis placed on the screen was for demonstrating her sex-appeal rather than her acting. I found the stereotypical natives prancing around ridiculous and Lange as a sex toy gratuitous. This version won a special Oscar for Best Visual Effects (Carlo Rambaldi, Glen Robinson, Frank Van der Veer) and sound and cinematography were nominated. Be my guest and explain to me why the 1976 version is better than I give it credit.

When the 2005 version came out, I was surprised many people criticized it. The length was too long at three hours? The pacing was off? stereotypical natives again? I do agree it was a flaw when the natives slobbered black oil and looked like they just crossed the lot from the set of The Lord of the Rings and Two Towers. Obviously, Peter Jackson wanted to create a setting showcasing the possessed, zombie-eyed natives as part of the mystique of Skull Island. It’s a subjective call whether you think the native segment of the film effective. Jungle headhunters? Spear-chucking heathens? As a prehistoric island containing creatures from a number of nightmares, the natives were another addition to the mystic aura of the island, thus Jackson dodged the stereotype issue. I was distracted by any offense by the time the dinosaurs rolled down the mountain. What a breathtaking sequence. CGI in the 2005 version works beautifully. I caught the film on television last week and admired Jackson all the more. His relationship with Andy Serkis, the talented actor who brought authentic Gorilla movements and human emotions via special effects to the screen is extraordinary.

Stay tuned for a post devoted to this intriguing personality.

What about Ann Darrow? 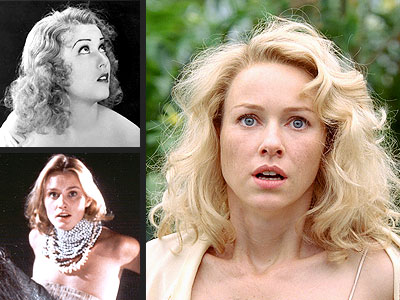 Fay Wray (1933), Jessica Lange (1976), Naomi Watts (2005). Which was your favorite? One reason the film was long was to give more characterization opportunities for developing Ann Darrow. The best parts of the film occurred when she was present. Watts as the vaudeville dancer juggling her way to win Kong over was exquisite and believable. One of the most tender love scenes I’ve seen on the screen happened in Central Park when Ann and Kong slid around the frozen pond. King Kong needed a revamp with technology that would create a scary Skull Island and the monster-on-the-loose scenes in NYC. The story goes that Peter Jackson saw the 1933 version at age eight and cried when Kong fell to his death. It was his favorite film and inspired Jackson to become a filmmaker. His attention to detail and dedication to the original story made the 2005 version the best of the three. He created a new generation of followers and added a positive redux to the fascinating heritage of King Kong. 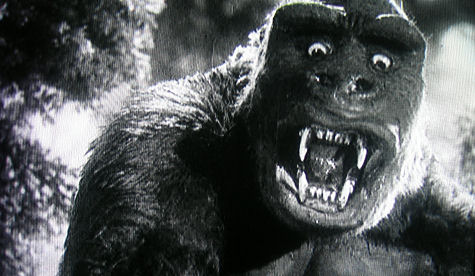 Which version do you prefer? What do you think of King Kong?