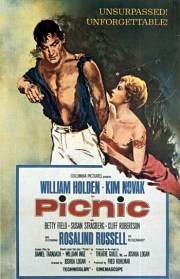 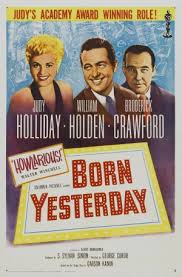 Today, the spotlight is on William Holden’s characters in Romantic films. Whether in the love triangle, or as the lead, characters lean toward self-absorption and antisocial behavior. Even though he starred with the “A” listers and won an Oscar for Best Actor (Stalag 17), Holden seems to stand on a plateau below the apex of his co-stars. His prolific career, and his star power during his height in the 1950s, should have garnered him more clout. Perhaps his personal life affected his legacy. So far, in this winter exploration of an actor I know too little about, William Holden has my admiration. Here are four films featuring Holden in romantic roles. I regret there are many I missed.

In Picnic (1955), he is Hal Carter, a vagabond loser who looks like a gladiator, fiery and full of sizzling passion under the surface. His chemistry wreaks havoc with the women of the town. Kim Novak is his sexual equal, and their chemistry is palpable during the dance scene at the river’s edge where the town celebrates. Director Joshua Logan directed the Broadway hit and the film. I loved the nuances and attack against convention in 50s society. It is a film taking advantage of the heat of summer to ignite the repressed desires of men and women. It is entertaining although not a satisfying drama like other “hot” films such as Cat on a Hot Tin Roof, but it is sexy in a covert, 1950s way. William Holden was great.

Sabrina (1954)  Edith Head’s costume designs never had a fairer model than Audrey Hepburn. Although Humphrey Bogart’s Linus Larrabee wins Sabrina in the end, William Holden as playboy little brother, David, plays up the charm and humor to create the popular classic love triangle. According to IBDb, the drama behind the film was tense.  “Humphrey Bogart was a last minute replacement for Cary Grant. Bogart and William Holden couldn’t stand each other. Bogart disapproved of Audrey Hepburn (he wanted his wife Lauren Bacall in the role), while Holden fell in love with her. Bogart got $300,000, Holden got $150,000, and Hepburn only $15,000. Asked how he liked working with Hepburn, Bogart replied: “It’s OK, if you don’t mind to make 20 takes.” Ouch! Though Audrey Hepburn and William Holden fell in love, “Hepburn broke off the relationship on learning that Holden could not have children” (IMDb).

Born Yesterday (1950) Check out TCM BORN YESTERDAY for complete information about this fun classic showcasing Judy Holliday as the dumb blonde who turns smart with the help of her tutor, William Holden. Director George Cukor places all the attention on “Billy” and it’s refreshing to see the men take a side seat. She liberates herself with knowledge and gets the best of her beastly, corrupt mobster boyfriend played by Broderick Crawford. I thought Judy Holliday was hilarious.

Grace Kelly began acting in 1950 at age 20 and retired from acting six years later to become Princess Monaco. In The Country Girl (1954), she takes off her makeup and gives an Oscar-winning performance as Bing Crosby’s wife (He was nominated as Best Actor). It is an odd film, a brilliant film with dynamic characters who take turns intriguing the audience–who is the bad guy and who is the good? It’s a psychological mystery surrounding alcoholism, co-dependency, and manipulation. Of the four mentioned in this post, this is the one I’d recommend watching. George Seaton won Best Screenplay. There’s Edith Head again, making Grace look magnificent here, then later in the same year in Hitchcock’s Rear Window. Bing Crosby’s performance impressed me the most. 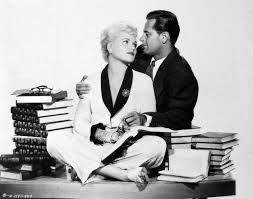 What do you think of these four William Holden films? There are a few not here. Would you recommend Love is Many Splendid Thing? Golden Boy? The Bridges at Toko-Ri?

26 thoughts on “William Holden as Lover”