Ever notice how editors and directors express the passage of time in films? Creating continuity between the switching of temporal planes is like stitching a smooth seam and both are difficult to master. Time passing is an opportune way to enhance the film’s wow factor and showcase the creativity of the director or the editor during post-production.

For example, remember the scene in Danny Boyle’s Slumdog Millionaire, when the young brothers are on the train stealing food and they fall off? They roll away in the dust and dirt, head over heels, and when they sit up, they are teenagers. What a clever way to pass time and age the characters.

There are traditional ways to pass time.

Orson Welles used sound, seasons, and symbols simultaneously in his masterpiece, Citizen Kane. To show the seasonal changes of a man’s life, he filmed boyhood symbols and changed the season. He used sounds of the piano playing to signify young love and applause at rallies to signify his adult life. The editing is one of many reasons why the film is highly regarded.

You could zoom into an eye and zoom out and the audience knows time has passed such as in Spielberg’s Saving Private Ryan to signify that Mr. Ryan is having a flashback or in Cameron’s Titanic when geriatric Rose remembers how it all really happened on April 15, 1912.

How about a White Flash? How about two? I thought it a perfect choice to signify the crossroads event in a character’s life. For example, in Elizabeth, her sister Mary died and she is given the royal ring and pronounced Queen of England. The next scene cuts to the breathtaking coronation ceremony at Westminster Abbey. Upon reflection, your narrative time-line is marked with those pivotal moments when life pitched a shocking event at you. Sometimes two or three in quick succession. Chop-chop. What better way to show that sensation than with a white flash in film? 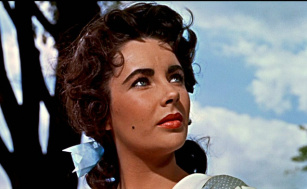 Makeup is an obvious way to show the passage of time. George Stevens’s Giant (1956) or

in David Fincher’s reversal of time adaptation in The Curious Case of Benjamin Button (2008). The success of make-up/digital manipulation in a film creates the passage of time effectively. 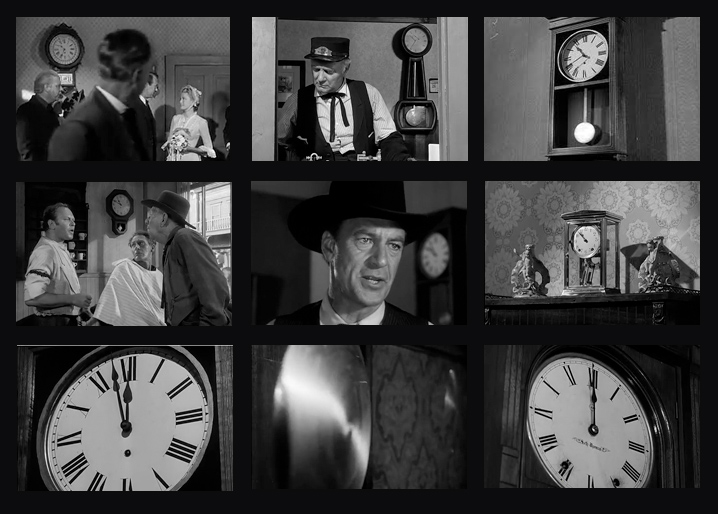 Clocks are obvious ways to show the passing of time. In High Noon (1952), the pendulum swings, the clocks advance while Gary Cooper waits for big showdown at noon. The illusion that the film is shot in “real time” is what makes the film memorable. Alfred Hitchcock tried this technique in 1948 with Rope.

Color is used to express the passing of time. In The Wizard of Oz, as Dorothy wakes up in the colorful world of OZ, it enhances the foreign local–it certainly isn’t black and white Kansas anymore, but the color change also suggests time has passed while she was up in that tornado traveling from one dreary place to a fantastical one.

Traveling through time via wormholes. Contact (1997). One of my favorite scenes. Ever.

The sun sets and rises. The fog clears. Music begins, changes, or ends.

What are your favorite scenes which feature the passing of time?

51 thoughts on “The Passage of Time in Films”