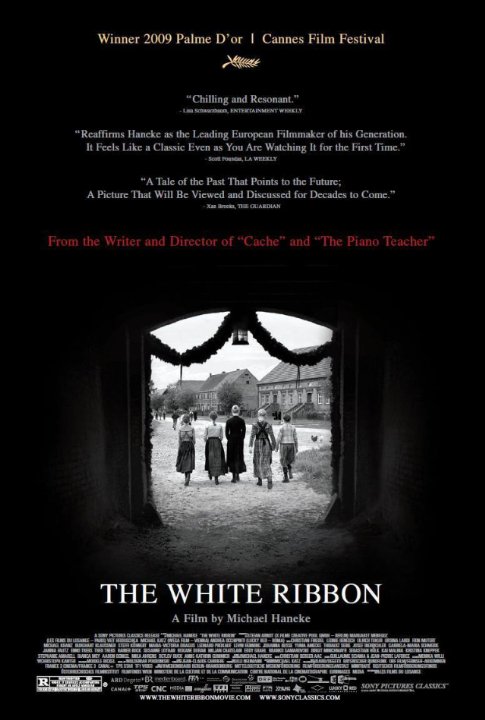 My friend ALEX RAPHAEL asked me to review a foreign film, and I happily obliged. I selected the 2009 German-language film written and directed by Michael Haneke and filmed by Christian Berger. The White Ribbon is placed at the brink of World War I. Filmed in black and white, the story focuses on the ordinary people of a village ruled by the authoritarian influences of a baron, a pastor, and a doctor. These elders maintain order and oversee traditions. When random events upset this hierarchical relationship, their simple world becomes warped and shrouded in mystery.

An old narrator (Ernst Jacobi) reflects back to a pivotal time, when in his youth, he was the school teacher (Christian Friedel) who tried to solve a mystery. Someone placed a tripwire across the path of the doctor who was out for his daily horse ride. A deformed boy is brutalized. A barn is torched. Who is doing this? It’s a macabre culture masterfully created by Michael Haneke. Authority is never questioned and rules are followed. Here, adults recite the adages “Children are meant to be seen and not heard” and “Spare the rod or spoil the child”. Indulged behind closed doors are deviant actions and secretive liaisons. As time continues and no suspects are brought to trial, the pace quickens as terrorized targets are the undesirables. The eerie energy engulfs the village, achieved through exquisite cinematography.

Is anyone innocent? Who is guilty? Maybe everyone. Is this a film which attempts to show the roots of Nazism? It might be a stretch, but The White Ribbon does show a seemingly “normal” rural village that grows out of control and fear freezes the innocent to inaction.

The works of Austrian Michele Haneke include Funny Games (1997) about a terrorized couple; The Piano Teacher (2001), a woman is suffocated by her mother and rebels in erotic ways; Cache (2005) features a Parisian couple terrorized by videos that link a secret in their past; and Amour (2012) is about the ultimate sacrifice of a Parisian couple. Guilt, secrets, suicide, terror, and repression are themes in Haneke’s works. I often wonder how the notorious heritage of Nazism adversely affected everyone who survived the war. Like first generation Jewish survivors of the Holocaust who suffered psychologically, Haneke, born in 1943, represents the first generation German who had to grow up bearing the guilt of it all. That angst sure seems to have bled into his films. Speculation aside, I highly recommend The White Ribbon.