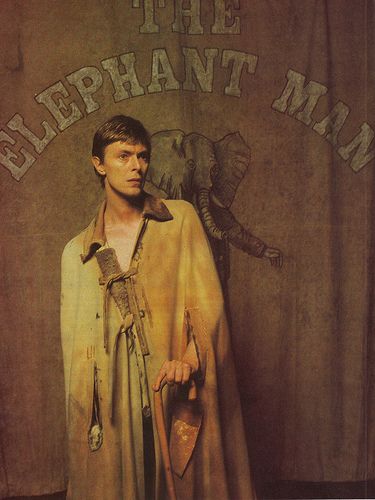 In Chicago,1980, I saw David Bowie on stage as John Merrick in The Elephant Man. Without using prosthetic or make up, he contorted his torso and twisted his arm to imitate the Victorian freak show attraction. In Merrick, the head covered with fungal abnormalities held the bountiful dreams of the inner man. During the performance, I was in the third row pinching myself, because a short distance away from was the pop-icon. I held my breath; I was part of an audience that was silent, listening to words instead of the music. My admiration for Bowie as an actor superseded my appreciation for him as a musician. After multiple albums including The Rise and Fall of Ziggy Stardust and the Spiders from Mars, Heroes, and Let’s Dance, I enjoyed seeing Bowie in a different light. As an actor, I was impressed.

Discovered in a freak show, John Merrick was rescued by a doctor who transferred the side-show attraction from the dark alleys of the Whitechapel District in London to the chandelier-parlors of the elite. John Merrick was a physical abomination. In the telling of the story, he shared an emotional connection with Mrs. Kendal, a famous actress and their link was obvious. Their personae was the only dimension anyone cared to see. I can see why David Bowie wanted to play this role. I have wondered about icons in general. They are larger than life and defined by their exteriors. What about the vulnerable, human inside? That love-hate relationship with the paparazzi? Did their dreams of fame become a curse? 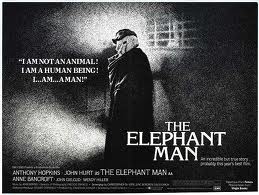 In the notorious Whitechapel district in London, John (Joseph) Merrick appeared briefly in the Jack the Ripper story which starred Johnny Depp in From Hell (2001).

How did Merrick inherit the name The Elephant Man? In Victorian days, “maternal impression” was a belief that the mother’s emotional/psychological perceptions transferred to the child. Supposedly, an elephant startled Merrick’s mother at a circus while she carried him. By the age of five, his skin and bone abnormalities presented themselves. The weight of his malformed head caused Merrick’s death. It’s a sad story.

David Bowie’s performance has stayed with me over the decades later. While Mark Hamill and Bradley Cooper have played The Elephant Man on stage, and I don’t know how well they did, I find it hard to imagine them outdoing Bowie’s performance. He understood the duplicity of appearance and reality. The facade of the freak show marvel vs. the private, gentle man who dreamed and possessed ideas like the rest of us.

35 thoughts on “David Bowie and The Elephant Man”