Siblings. I don’t remember if we have ever been close. We’re all in our late forties and early fifties. Some years, we’ve hardly tolerated one another. For what reason? The birth order? The first of four, I was the bossy one and resented having to watch the three of them. To me growing up, my little sister was a whining princess who had dodged curfews and chores while I did them all. She had complained she resented going through school being compared to me, so she rebelled. When I graduated high school and joined the Navy, I rarely thought about her. We just parted ways. The same can be said for my brothers. I was the tomboy who didn’t want dolls. I climbed trees, shot marbles, rode my bike everywhere, sharpened swords from tree branches and defended my fort. When I left home for good, all I felt was good riddance. No one wrote me letters or called. Neither did I.

As time passed, we took turns and married, had kids, and divorced. There was the occasional snappy remark instilling resentment or the full-frontal, verbal attack which fostered hatred. Personal friends became my sisters. My brothers had their own adventures and weren’t prone to discussing their feelings or sharing their goals or troubles. It was none of my business. As adults, we gathered at Mom’s house for the holiday get-together and were cautioned to “be civil or leave.” As I’ve grown older, it bothers me we aren’t close. But how do you change life long perceptions or soften a hard wood?

Of the four of us, we would all agree my brother in the front seat next to the oranges and my sister standing behind him have never seen eye-to-eye. The other day when we tried to bond, she confessed she felt compelled to find the one toy my brother was obsessed with as a boy and surprise him.

For twenty years, my sister has looked to find them. We all remember my brother sticking his tortured pirates with pins and the sound effects he would make. How ironic that she found them on E-Bay and paid a hefty price for these plastic guys that were once bought with a quarter from a five-and-dime forty years ago. 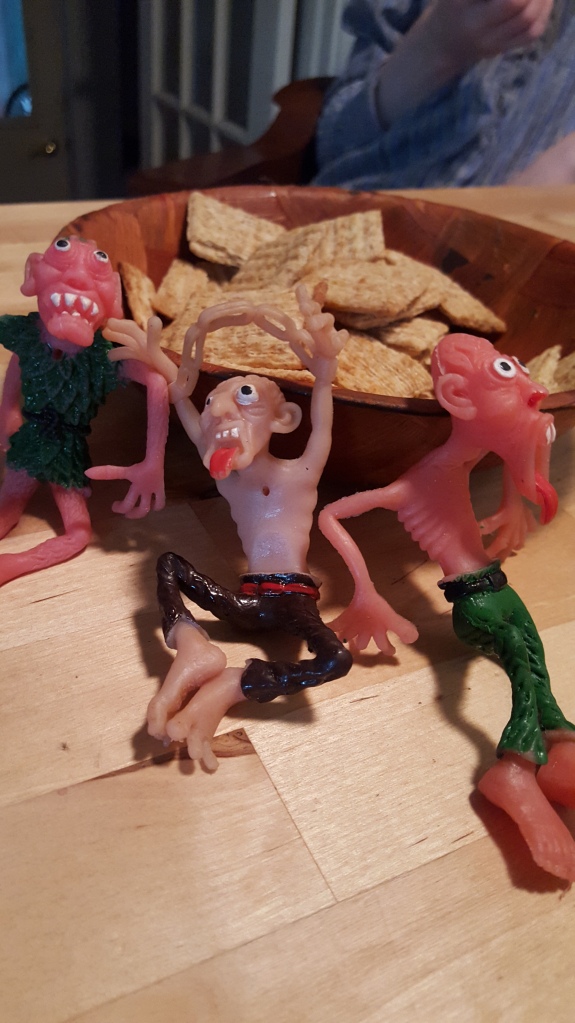 Wouldn’t you know, my brother laughed and teared up with joy when he saw them? He stood up and gave my sister a hug and thanked her with great sincerity. We all started tearing up. How ironic that his least favorite sibling was the one who made the effort to please him. If those two could get along, maybe hard wood can soften. Maybe there’s still time for relaxed conversations. For compassion. For laughter. Maybe!