Hell is the nickname for Helena and she met up with our group on the Greece trip and tagged along. She’s from Bristol and a geologist, but I think of her as a gypsy, for her lifestyle is devoted to traveling and she’s been all over the world. At 32, she has a free-spirited attitude and a zest for interacting with everyone she meets. I remember feeling invincible at her age. I don’t feel much like that twenty years later. When we stopped at the port of Kusadasi, Turkey, I was a little nervous getting off the boat. The bazaar wasn’t my idea of fun because I dislike being accosted by the salespeople who try and steer you into the stores to buy jewelry or expensive trinkets. She suggested leaving the bazaar and exploring the streets of the city. I thought it might be dangerous. I imagined dark alleys and hearing only a strange language I had no idea how to interpret. What if something went wrong? Jim and Hell thought it would be fun to walk around the main streets. I went along with them out of peer pressure, but I wasn’t happy about it. The rest of the group was fine and busy, so I had some free time. Do I stay safely behind or venture out and explore? What a silly question!

We didn’t go far. Just a few blocks down the main avenue which was still touristy, but it was quiet and bright at noon. I was fearful a bomb would explode or we’d be attacked by rioters. I believe the media’s constant spewing of atrocities is creating a culture of fear; it had its hooks in me. It was hot and Hell wanted to sit at a cafe and watch the people go by.

Jim selected a cafe in cool shadows, and before I knew it, Hell had ordered peach flavored tobacco for the Hookah. The owner and servers were generous and friendly. With broken English, they waited on us as we sipped beer and smoked. It was something I never thought I’d be doing, smoking the hookah. This two-hour respite from herding the group was a highlight of the trip. I wouldn’t have done it if Hell hadn’t been there. I studied her as we three talked about our lives, politics (2 minutes only), and traveling exploits.

Something completely different for me. 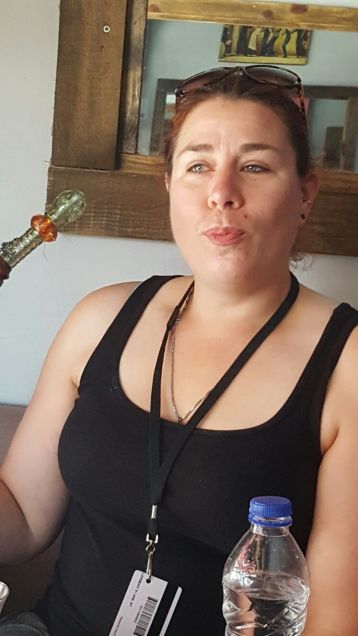 The digression from my comfort zone was a reminder how important it is not to hide behind imagined fears. My personal saying is, “Nine out of ten things you worry about don’t come true.” I let my worries get the better of me, almost. Looking at Hell as she animatedly talked reminded me of someone I once knew. I saw a younger version of myself. Where did that fearless woman go? Who is this older woman today who recoils from spontaneity?

So we smoked. We laughed. We created a memory. My morals weren’t compromised. The day remained sunny and calm. Strangers were friendly and courteous. Thanks, Hell!

22 thoughts on “Hell and the Hookah Bar”