A hearty thanks to everyone for a whole YEAR of Lucky 13 Film Club discussions! I am pleased to wrap up the year with one of my favorite movie bloggers, MARK at MARKEDMOVIES. Al Pacino is one his favorite actors and after thinking about an angle for approaching Pacino’s prolific career, we opted to narrow the focus to a theme–roles where he mentors younger, promising actors.

When you think of the great Pacino performances, or the genre that he’s most renowned for, your memory will most likely be drawn back to the crime/cop films that he’s appeared in. That’s not to say that Pacino hasn’t tackled a diverse range of roles but it’s difficult to forget about the ones he’s most synonymous with: The Godfathers, Serpico, Dog Day Afternoon, Scarface or Heat; maybe even his grandstanding, comic-book, mob boss in Dick Tracy?! However, there are two that stand out from these aforementioned classics, yet somehow don’t quite get the same kudos and sometimes get lost in the shuffle. Carlito’s Way and Donnie Brasco are two Pacino great crime characters, but they’re also among a few of the last films that Pacino was involved in that were truly excellent pieces of cinema. Pacino’s, Carlito Brigante, is an aging Puerto Rican gangster who finds it’s a hard and fruitless task to shake off his shady past. As “Lefty” Ruggiero in Donnie Brasco, he is a tragic character, an aging gangster who has always been a criminal bottom-feeder, overlooked and past his prime. Both characters somewhat represent the career of Pacino himself: a criminal image he couldn’t shake off and another one so over the hill that he wasn’t taken seriously anymore.

With this in mind, Pacino was going through a period in his career in the 1990s when he would work with younger leading actors. He was well into his 50’s, but he  consistently seemed to pair-up with actors in their 30’s. Not just any younger actor, though. These were actors that were just hitting their stride: Sean Penn in Carlito’s Way (1993), John Cusack in City Hall (1996), Keanu Reeves  in The Devil’s Advocate (1997), Johnny Depp in Donnie Brasco (1997), and Russell Crowe in The Insider (1999). It’s a trend he would continue later in 2003 with Colin Farrell in The Recruit, Matthew McConaughey in Two For Money (2005), and Channing Tatum in The Son of No One (2011) – although the last two films are better forgotten about.

As you can see there has been a pattern among the films of Pacino and his support for the newly established leading man. It was the work of Penn, Depp and Crowe that benefited most, though. Unlike the other actors mentioned, Pacino didn’t just support them, they played a major contribution to the films themselves and in many ways complemented Pacino as much as he complemented them. Al has openly admitted to enjoying working with younger performers because he’s humble enough to admit that he can also learn from them. There could be another reason for him lending his support on such a regular basis, though, but you’d have to consider his own experiences to see why…

It’s fair to say that it was playing Michael Corleone in The Godfather which catapulted Pacino’s career. However, the legendary Marlon Brando (as well as the producers) apparently weren’t keen on working with this relatively unknown, young actor and thought that Coppola was making a mistake. As we can now see, history has proven that Brando and Co. couldn’t have been more wrong. I’m just speculating here, but maybe this rejection from such an influential screen giant is what influenced Pacino to  work prominently with younger, up-and-coming talents? Pacino took a different approach than Brando, and it’s admirable to see that Pacino had as much faith in other younger actors and recognized the power of a veteran actor paired with young talent. There’s an underdog story to Pacino’s success as an actor, and who doesn’t love an underdog? 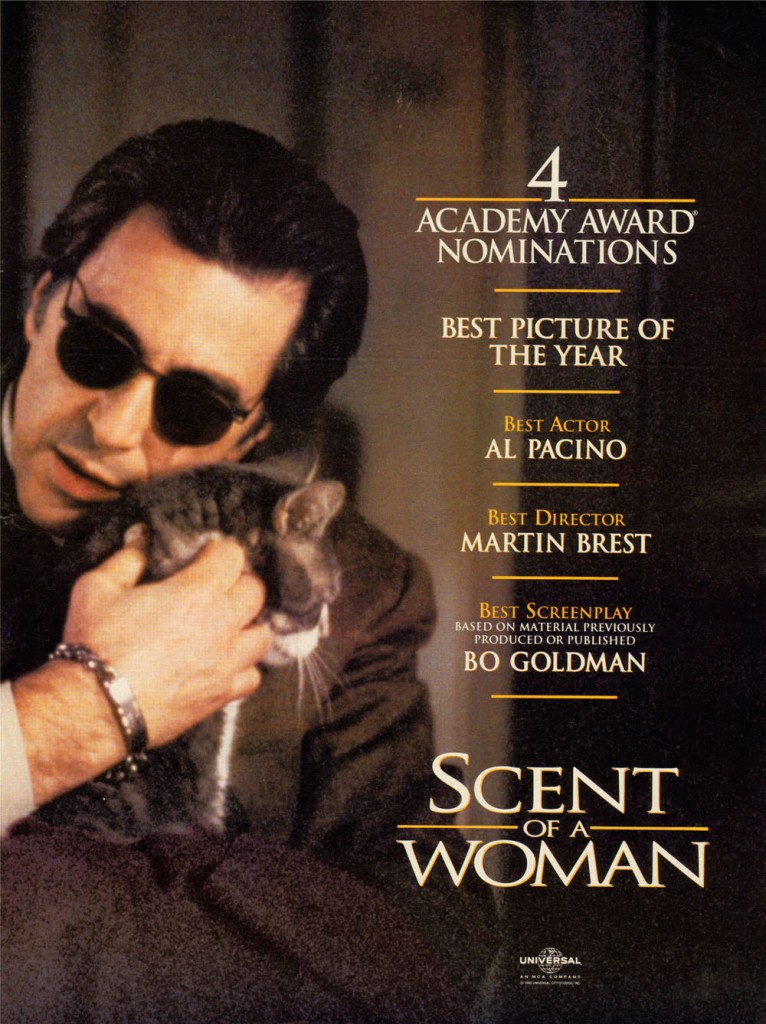 I enjoyed the partnership between Al Pacino and Chris O’Donnell in Scent of a Woman(1992). With characteristic gusto, Pacino deserved his only Oscar for Best Actor by playing the cranky, retired Army Ranger Lt. Colonel, Frank Slade. (Nice use of a character’s name, eh? He’s quite frank in speech and formidable as a stone.) Charley Simms (Chris O’Donnell) is the flustered, poor kid trying to survive at an East Coast prep school. George Willis Jr. (Philip Seymour Hoffman) is the fleshy, slimy nemesis. 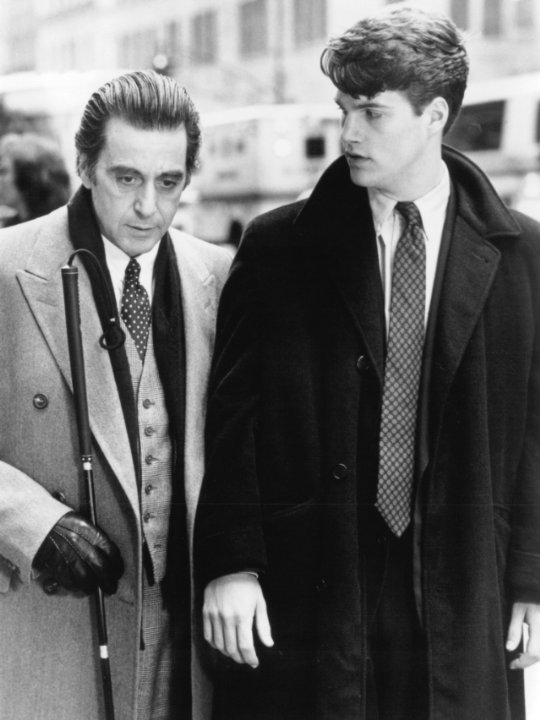 A leader in the military executes codes, sets expectations, and manages the brotherhood of soldiers. In this way, soldiering is like playing a crime boss; it’s easy for us to see Pacino in the role. Emasculated by his forced retirement, Frank over-compensates for his blindness, and who better than Al Pacino to act out that kind of pain with a booming voice and some hefty scene-chewing? Charley and Frank need each other much to their surprise, and their blossoming father/son relationship feels genuine. It is a delight to see the soft side of Frank, whose romantic sensibilities with women on the dance floor and attracts rather than repels. Frank “sees” the beauty within, and this sight allows him to see the integrity in Charley demonstrated during the riveting trial speech that saves Charley. Did Frank have this ability when he had sight? Perhaps, but I like the redemptive irony of the motif. It added a dimension to his character. It is a fine screenplay by Bo Goldman and one of my favorite Al Pacino performances.

As a veteran actor to emerging actor or character to character, Al Pacino’s role as mentor is interesting. Which film do you like best?