Today is my lucky day! You’ve decided to stop by and add to the discussion to this month’s film topic on my double-nickel birthday. Thank you! 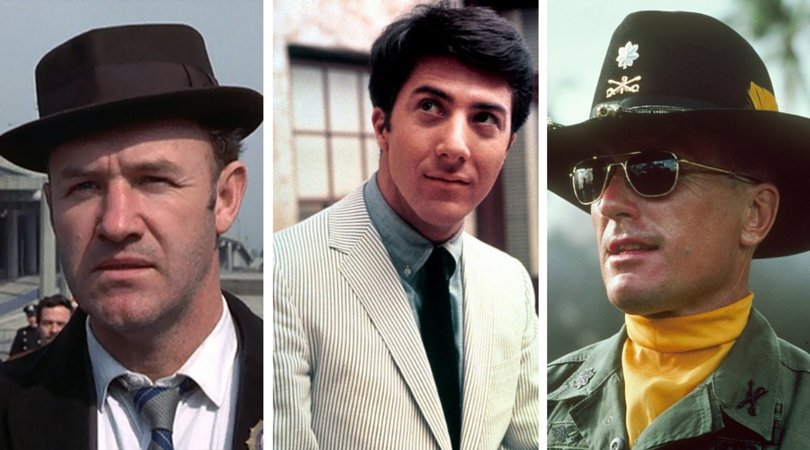 Gene Hackman, Dustin Hoffman, and Robert Duvall are lifetime friends who bunked together while honing their craft back in the late 1950s. It’s a fascinating trifecta. Read Flip the Movie Script 2016 article, “A Brief Time in History with Friends Hackman, Hoffman, and Duvall” found HERE.

Considered character actors, they catapulted to stardom when their breakout roles were part of an Oscar winner for Best Picture. (Dustin Hoffman in 1967 with The Graduate, Gene Hackman in 1971 with The French Connection, and Robert Duvall in 1972 with The Godfather) Hoffman and Hackman won Oscars for Best Actor, and Duvall was nominated for his supporting role. As generational friends and colleagues, they’ve grown old on the screen and we’ve watched them do it. Their longevity is remarkable. According to IMDb:

Having read Allan Hunter‘s biography Gene Hackman, after his win for Popeye in The French Connection, there was a battle within Hackman. How to navigate a career? Should your choices be picky for art’s sake, daring to fall out of favor if your film bombs? Or should you accept any role because you are afraid your flame will burn out quickly if you don’t maximize Oscar success? For Hackman, he never thought “this ugly mug would be so lucky.” By the middle 1970s, he accepted whatever script was offered, and it deflated his high-quality acting persona. Then in the 1980s and 1990s, he seemed to be cast in the same role over and over. The bastard. The son-of-a-bitch. He became “the man” everyone wanted to stick it to.

Please welcome my co-host, Nancy, my mother who has watched these three actors their entire careers. I asked her, “Because Gene is ordinary looking and plays ugly characters does he become repellent to you? If Gene were gorgeous and played ugly characters would he be as repulsive? Or sexier?”

Gene Hackman’s looks have nothing to do with it. To me, he comes across as arrogant, even in comedies.  I don’t see him really “acting”, only playing parts that are him.  I love Robert Duvall.  Every character is different, good or bad, such as The Great Santini, Tender Mercies, and as Lt. Col. Kilgore. I don’t have an opinion on Dustin Hoffman one way or another.  Most of his roles aren’t memorable to me. None of them radiate sex appeal. Not like Richard Harris.

Gene Hackman said in Allan Hunter’s biography that he knew if he couldn’t get the girl in the film, he would never become a “movie star” like, well, Richard Harris. His talents were utilitarian to a script that needed a smug, corrupt leader. He was perfect and predictable like a favorite dish at a restaurant. If you didn’t get what you expected, you’d be disappointed.

With actors who have sustainable longevity in the business, there seems to be a young version and an older version of themselves. Actors who play diverse roles are my favorite. They are the artists. One wonders after playing 80 + films, like an old horse down a hoof-beaten path, it’s not acting anymore, it becomes, as Nancy suggested, just the man on the screen. The originality of the initial spark that captivated an audience at the start of a career has long since burnt out.

Since many people have a say in the outcome of the film, it would be hard to know which film to pick. What seems like an interesting, meaty role, could end up being an unbalanced disaster beyond the actor’s control. It is the brave artist on screen who bears the criticism of good chemistry gone sour. For career actors, who make 80+ films, I have to wonder if they feel that filmmaking is a hit or miss endeavor. Maybe if one can count four or five excellent roles in a fifty-year career, that’s a job well done at the end of a life?

Considering Hackman, Hoffman, and Duvall, why do you prefer the one you picked? Their best role?

73 thoughts on “L13FC: The Long Careers of Actors”