Here are a few recommendations for you. There seemed to be an unconscious theme going on with my viewing when first I watched actor Charlie Plummer in the messy All the Money in the World (The book was better.) and then went to the cinema to find him again in a major role that grabbed my heart and squeezed. British Andrew Haigh directed that tale set in Portland, Oregon and the wilderness landscape of Idaho. Days before by happenstance, I rented his 2015 romantic drama, 45 Years.

Director Andrew Haigh‘s film adaptation Lean on Pete(2018) from the novel by Willy Vlautin is a heartfelt coming of age story featuring teenager  Charley Thompson (Charlie Plummer). Enduring shaky parenting and the dire need for money, Charley finds a job at a racetrack and is heartbroken when the horse Pete is destined for slaughter. They run away in search of a home and his trek to find a distant relative becomes a tale of survival. Thank God for the satisfying ending because the audience must endure Charley’s misfortunes and it’s heavy. During the trek, Pete walks with his horse instead of rides him, and his monologues with Pete soften the film and balance out the harsher episodes of his life. Soulful and tender, Charlie Plummer gives an outstanding performance with solid performances given by the rest of the cast: Travis Fimmel, Steve Buscemi, and Chloë Sevigny. 4/5

45 Years (2015) It was great to see Charlotte Rampling and Tom Courteney on the screen together as the featured couple. This Andrew Haigh film is utterly different than Lean on Pete. Kate and Geoff Mercer are about to celebrate their 45th anniversary in a week. Geoff receives a mysterious letter regarding an old flame before his marriage to Kate. Vacationing in the Alps in the 1960s, the lover had died. Kate Mercer’s curiosity about their relationship creates a foreboding anticipation as she learns to her dismay that the love of her husband’s life was not her. A long marriage carries with it layers and secrets of the heart and emotional triumphs and pain. As the days creep toward the anniversary party, the fracture in the foundation spreads. Watch how music plays an effective role in the storyline. It’s a quiet film that unfolds gently. 4/5.

Bombshell: The Hedy Lamarr Story documentary was a captivating revelation of the stunning Hollywood star, Hedy Lamarr. I didn’t know anything about her. A popular theme for me is the concept of beauty and how women respond to that power for better or worse. Place that theme in the 1920-1940s, and I’m a sucker for the story. What was extraordinary about Hedy was her mind. Few knew she was a keen inventor who aided the allies in World War II with her invention. (And she didn’t get paid for it.)  It was the basis of what we take for granted today–WiFi, GPS, and Bluetooth. Learning something new gives my rating for the documentary high marks. I was riveted. 4.5/5. 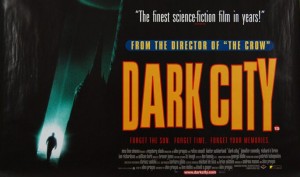 Dark City (1998) film by Alex Proyas is a science fiction mind bender. A man wakes up with his memory gone but next to a murdered body. The police inspector (William Hurt) and the kooky psychiatrist (Kiefer Sutherland) try their best to capture him (Rufus Sewell). His estranged wife (Jennifer Connelly) can’t decide if she should help him figure out his personal mystery. Meanwhile, menacing bald men in long black coats have special powers and try to kill him. The production design borrows heavily from Metropolis. In the Director’s Cut, Proyas admits he was additionally inspired by the film noir The Maltese Falcon, and The Twilight Zone. Add to the shadows, buildings that grow and shift (Inception took this and ran with it), a Truman Show-esque punch through reality’s wall, and the Nosferatu baldies, who collectively click their teeth to communicate. I couldn’t help but feel the movie borrowed from so many places there wasn’t anything original about “the masterpiece”. If I had seen it in 1998, I would have loved it. The set pieces, I learned, were sold to the producers and used in The Matrix a year later. Did it wow you back in 1998? 4/5.

49 thoughts on “Are You Not Entertained? Four Films”