Welcome back to the Lucky 13 Film Club and three cheers to my English buddy, Pete, for accepting my invitation to co-host this month’s discussion. We wanted to extend our admiration of Brian De Palma to you and encourage you to respond to everyone’s ideas in a positive way. Please join the conversation. Why is your favorite De Palma film memorable?

Blow Out. (1981)
I am starting with this film as I like it so much, and think it is grossly underrated. There is some real skill here, and the recurring use of sound and film editing, film techniques within a film. De Palma makes the most of going over the same thing time and again, with subtle changes that show the developments to the viewer, as they are discovered by the character of Jack (John Travolta) on screen. The director also shows his skill for pacing, as we happily wait for the painstaking research to play out before us, then get swept along by the excitement of the finale.
The split screen helps too, building tension, and saving running time in the process. Then there is the theme of ‘the scream’, one that runs through the whole film, and the idea of filming important scenes against the background of real events and large crowds, in vivid colour.
Body Double (1984)
This film stayed with me and is actually a lot better than it feels when you are watching it. The
story is secondary to the real purpose of the film though. That is De Palma playing fast and loose with an unbridled homage to the work of Alfred Hitchcock. For film fans, it becomes a delight to spot the references, many of which are about as subtle as being hit with a cinematic brick. At times it feels like the director has taken the films of the man he admired so much, and inserted them into Body Double in order of preference. They are so blatant, all that is missing is a title sequence appearing ahead of the scene. We have the voyeurism of Rear Window, the close-up collusion of Rope, and the use of the telephone from Dial M For Murder. Throw in some Vertigo and Psycho scene-alikes for good measure, and all we seem to be missing is the seaside scene from Rebecca, and the fairground from Strangers On A Train. But don’t let that put you off. It is a dedicated homage, cranked up for the 1980s.
Carlito’s Way (1993)
If the first choice was innovative, whilst derivative, and the second an outright homage, my third
choice is all about casting, and locations. This modern gangster film is far superior to De Palma’s overblown and out of control Scarface, made 10 years earlier. By this time, the director had grown into making something more serious, and despite using the same lead actor, Al Pacino delivers a fine performance that is a world away from hysterical Tony Montana. A barely recognizable Sean Penn captures the style and greed of the period as the friend and lawyer Carlito rely upon, and smaller roles from Luis Guzman and a testy John Leguziamo are memorable, too. Locations are bitingly authentic, from the run-down cafe early in the film, to the prison barge holding the Mafia boss, and the nightclub owned and run by Carlito. Everything smacks of authenticity, and if any of them were sets, I surely didn’t notice. Even though I knew some just had to be. This is my favourite De Palma film, with its sense of impending doom running all the way through.

Cindy’s thoughts:
Remember in Casualties of War when the sarge, Sean Pean, was shaving looking into the camera like it were a mirror in front of him while soldiers talked about him without his knowing? I like how De Palma transitioned from the split screen to placing one image, usually a character, in the foreground. It happened later again when Michael J. Fox’s character is being transported via helicopter. It happens in many De Palma films. The trick forces the audience to focus on two stories going on at once. 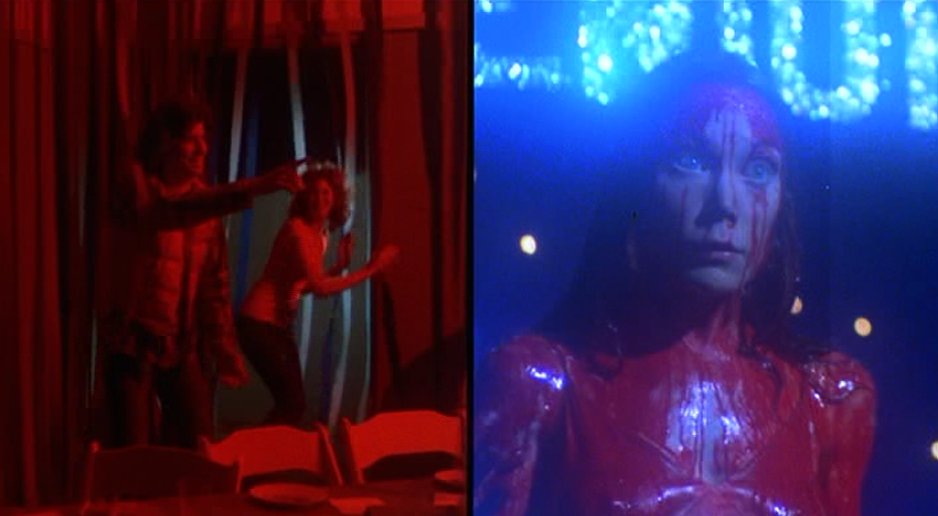 The split-screen is a trademark technique. Repeating the stars from one film to the next is another trademark. John Travolta. Al Pacino. Melanie Griffith. Sean Penn. Can you sum up Brian De Palma? We know his stories are a parasitical obsession with Hitchcock. His stories are passionate displays for conspiracies and voyeurism. The scores are loud and melodramatic, and I am entertained when I watch them.

Mission Impossible is the best of the long franchise. Carrie is a horrifying film adaptation, probably the best of Stephen King’s novels.
My favorite De Palma film is The Untouchables. Robert DeNiro was electric as Al Capone. Jim Malone (Sean Connery) as the mentor to Eliot Ness (Kevin Costner) was charming and Ennio Morricone‘s score sizzled. The best trick of DePalma for me, however, is his use of contrasts. He takes a beautiful setting–the hill country of Vietnam, the Canadian Rockies, the beauty of architecture, like sweeping stairs and velvet drapes, and inserts a horrifying situation or tragic character, the “humpbacked and crooked”, the two extremes, to create a binary experience. While De Palma films may seem like period pieces from the 80s and 90s and not as great as films from the 60s and 70s, I am nostalgic for them. He filmed on location in interesting places. I miss the  De Palma tricks, the colorful, melodramatic scores, and the corrupted souls fumbling around in the dark with the hope of redemption that rarely comes.
What’s your favorite De Palma scene?
Thank you, Pete, for co-hosting! Check out Beetley Pete’s blog which can be found HERE.