Anton Chekhov‘s characters suffer. They lament because life is a waste, or they suffer from the sharp blade of unrequited love. Life is a jail sentence, and each stage is a desperate attempt at happiness that rarely endures. Here’s an excerpt from one of my favorite stories by him.

A shy soldier with no experience with women is forced to attend a party when something miraculous happens. Taking a wrong turn in the mansion, he finds himself in a study in complete darkness.

Ryabovitch stood still in hesitation. . . . At that moment, to his surprise, he heard hurried footsteps and the rustling of a dress, a breathless feminine voice whispered “At last!” And two soft, fragrant, unmistakably feminine arms were clasped about his neck; a warm cheek was pressed to his cheek, and simultaneously there was the sound of a kiss. But at once the bestower of the kiss uttered a faint shriek and skipped back from him, as it seemed to Ryabovitch, with aversion. He, too, almost shrieked and rushed towards the gleam of light at the door. . . .

When he went back into the drawing-room his heart was beating and his hands were trembling so noticeably that he made haste to hide them behind his back. At first, he was tormented by shame and dread that the whole drawing-room knew that he had just been kissed and embraced by a woman. He shrank into himself and looked uneasily about him, but as he became convinced that people were dancing and talking as calmly as ever, he gave himself up entirely to the new sensation which he had never experienced before in his life. Something strange was happening to him. . . . His neck, round which soft, fragrant arms had so lately been clasped, seemed to him to be anointed with oil; on his left cheek near his mustache where the unknown had kissed him there was a faint chilly tingling sensation as from peppermint drops, and the more he rubbed the place the more distinct was the chilly sensation; all over, from head to foot, he was full of a strange new feeling which grew stronger and stronger. . . . He wanted to dance, to talk, to run into the garden, to laugh aloud. . . . He quite forgot that he was round-shouldered and uninteresting, that he had lynx-like whiskers and an “undistinguished appearance” (that was how his appearance had been described by some ladies whose conversation he had accidentally overheard). When Von Rabbek’s wife happened to pass by him, he gave her such a broad and friendly smile that she stood still and looked at him inquiringly.

“I like your house immensely!” he said, setting his spectacles straight.

Here’s a link to read the story in its entirety found on East of the Web.com

A single incident transforms Ryabovitch. From his dutiful existence, conditioned and dull, he intercepts the force of surprise and experiences the warmth of attraction. A soul unaware of how starved it is for romance and attention. One moment unmindful. The next, the flicker bursts to flame. I like stories written around turning point moments in life. 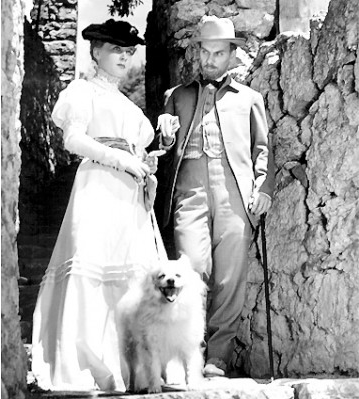 Yalta. Who wouldn’t fall in love? Anna Sergeyevna (Iya Savvina) is a young wife and alone. She parades around the boardwalk with her fluffy white dog looking beautiful. She attracts the handsome, older banker Dmitriy Dmitrich Gurov (Aleksey Batalov), who is also married and alone. The two experience a passionate affair. When responsibilities separate them, Gurov returns home to his privileged life no longer satisfied. I don’t think Chekhov is saying we should dishonor our reputations and responsibilities. I think he means that we choose our lives and then find we are eventually stuck in them. His story may feel dated to viewers today, but his truths about love and relationships are universal.

Louis Malle directed this twist on Chekhov’s play Uncle Vanya. Theater director Andre Gregory and his actors, including Wallace Shawn as Vanya and Julianne Moore as Yelena, arrive at the New Amsterdam Theater in New York’s Times Square, making casual conversation among themselves. While still wearing their street clothes, the actors perform the play on a nearly blank stage. Julianne Moore is young and gorgeous as her presence tempts the frustrated Vanya. His life has been wasted behind the shadow of others. The film has a slow start which gains momentum and eventually becomes exciting. Chekhov’s language is mesmerizing. The questions raised by Vanya stay with you long after the film is over. Not sure I buy Wallace Shawn as Vanya, but Julianne Moore was marvelous. 3.8/5

Do you like love triangles? Then you’d enjoy The Seagull. Age and unrequited love are major themes in this Chekhov play adaptation. Saoirse Ronan gives a satisfying performance as the ingenue Irena who falls for older Boris Trigorin (Corey Stoll) who is the lover of Russian diva Irina (Annette Bening). The cast delivered but none better than Elisabeth Moss who makes the most of her tragic character, Masha. I thought the execution of time by director Mayer disjointed. But I enjoyed the subtle interplay between the characters even though the large personalities were melodramatic to the point of distraction–but that just might be the camera editing which at times seemed choppy. Overall, the setting, the cast, the plot by Chekhov is an entertaining dark comedy. 4.5

What are your favorite adaptations, short stories or plays by Chekhov?

22 thoughts on “Are you not entertained? Chekhov”