As I grazed on a bowl of chocolate-dipped pretzels last night, it occurred to me that the movie I watched had much the same texture and flavor. The Professionals (1966) was directed by Richard Brooks. Filmed in technicolor against the crunchy backdrop of Death Valley, California, Lee Marvin, and Jack Palance were the salty bits while Burt Lancaster and Claudia Cardinale were the sweet chocolate glaze. Who doesn’t like salty-sweet combinations? I think Brooks knew his audience and gave them what they wanted. I know I enjoyed watching Burt Lancaster scale up the side of a cliff with a rope and no stuntman and snappy one-liners like this one:

Rico (Lee Marvin): So what else is on your mind besides hundred-proof women, ‘n’ ninety-proof whiskey, ‘n’ fourteen-carat gold?

The film received Academy attention for Best Direction and Screenplay (Richard Brooks), and Best Cinematography (Conrad L. Hall). The story is about a rich Texan who hires three talented mercenary misfits to rescue his beautiful wife from the Mexican bandit Jesus Raz (Jack Palance). The problem arises when the rescuers realize Mrs. Grant (Claudia Cardinale) wasn’t kidnapped by Razu, but running away from her Texan husband (Ralph Bellamy). 4/5
An easy-breezy film that triggered a memory from my youth when male relatives watched and chuckled on late Sunday morning while waiting for the football game to start.

Ulzana’s Raid (1972) is a serious tale starring an older Burt Lancaster, Richard Jaeckel, Bruce Davison and Joaquin Martinez. It is set in the late 1800s and filmed at the Arizona/Mexico border. The terrain is hard and unforgiving but there’s no sweet glaze this time to balance out the harshness of Apache savageries like gang rape, brutal killing, and torture. Burt keeps his feet on the ground and isn’t supplying witty one-liners. Instead, he’s the mentor to a young Lieutenant who grapples with preconceptions of Apache way-of-life, hatred for them, and aspiring to be an effective commander. Ulzana (Joaquín Martínez) and his men escape from the reservation station and Lt. Garnett DeBuin (Bruce Davison) is assigned to bring them in. Director Robert Aldrich takes Alan Sharp‘s script and creates a memorable film. The character Ke-ni-tay (Jorge Luke) is stuck in the middle as the soldier scout who tries to explain to Lt. DeBuin the Apache man needs the power, the essence of a man to be strong. Living on the reservation makes men weak and goes against what Apache stands for. Ke-ni-tay was the most interesting character in the story. I would have preferred to see the plot pan-out through his perspective and know his backstory. However, the film is interesting enough except for the distracting, ill-matched score by Frank De Vol. For instance, after each horrific encounter between white settlers and the Apache, the music resumed with a happy, bouncing Magnificient Seven-ish theme. If you like your westerns with bite, you would enjoy Ulzana’s Raid. 4/5 Sorry, Burt, in this film you seemed tired and uninterested. 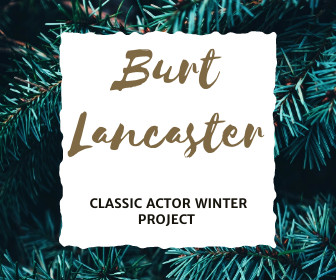 66 thoughts on “Burt Lancaster: A Pair of Westerns”