This year’s winter project featuring a classic male actor I am sketchy about is Gene Hackman. Based upon recommendations, I’m starting off with a strong pair that many have remarked were Gene’s best-known or favorite performance.

I have read that this was a film that set a precedent in police dramas or at least led the charge in portraying cops of dubious morality as the anti-hero. In the 1970s, television shows continued the trend to supply squeaky-clean officers catching the bad guy, but films such as Dirty Harry(1971), Serpico (1973), and The Seven-Ups(1973) show tainted cops ruthlessly taking charge of their urban backdrop. In the case of The French Connection, New York City never looked rawer or more treacherous. In this way, the buddy pair, Popeye (Hackman) and Cloudy (Scheider) fit right in chasing down gangsters, druggies, and deadbeats of the city. 4/5

1. The filming of the ugly alleys, subways, and desecrated buildings of NYC and the beautiful seaside port of Marseille, France was a fine contrast.

2. Roy Scheider’s bubbly performance was his second-best. (All That Jazz, #1)

3. Popeye’s obsession with catching the French kingpin Alain Charnier (Fernando Rey) drew me in and held my attention.

4. The disgusting building where the climax was shot. The echoes, the shadows, and the reflections–you could smell the mold, feel the contaminated, cold air seep into your skin while Popeye sloshed around the debris. What a visceral experience.

5. Based on a true story, it was an intriguing, albeit, dreary story.

Gene Hackman has the reputation for playing characters that were hard-shelled jerks over his career. His voice is icy to listen to, his jaws set, and his characters won’t budge. Gene Hackman does this well, but I prefer his characters when they have a vulnerable side. Gene Hackman was perfect in this role as the surveillance expert, Harry Caul. He can’t help the fact he must live a lonely life, isolated and inadequate around others, unable to commit to friendships or relationships with females. His eyes suggest he was a product of the system, and his dislike for himself bubbles to the surface, and that’s a tricky acting job. 4.5/5. 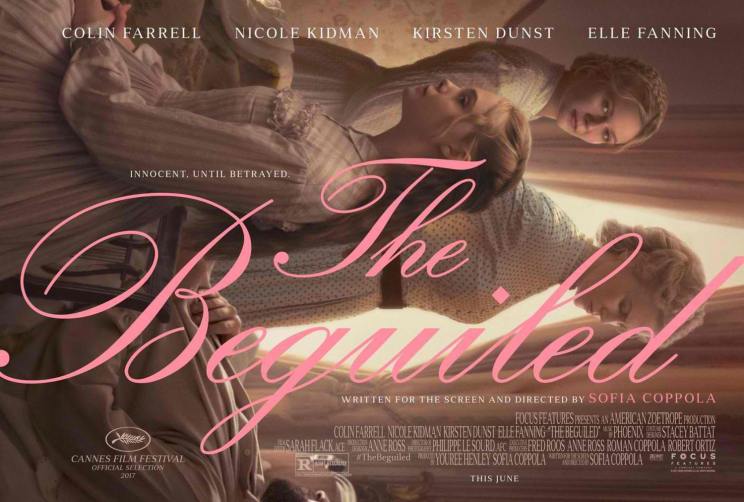 I recommend reading Keith’s thoughts about the 2017 remake found here:

Three years into the Civil War, handsome Union soldier John McBurney (Clint Eastwood) is discovered and brought to Miss Martha Farnsworth Seminary for Young Ladies. At first, he is delighted to be surrounded by the cloistered beauty of varying ages. An African American slave, Hallie,  (blues singer Mae Mercer) who remains on the estate and assists headmistress Martha (Geraldine Page, Hondo, Sweet Bird of Youth), try to keep order among the girls who are drawn to their new guest. The girls learn French, garden, knit and embroider, and take the post to look out for Union soldiers while getting updates from Southern soldiers as they pass by the imposing wrought-iron gate that keeps the girls in like a prison.

The 1971 version was produced and directed Don Siegel (Eastwood and he worked together in five films) was based on the novel A Painted Devil by Thomas P. Cullinan. The 1971 version focused on sexual taboos and sexual repression created by isolation of the war. The male is the victim and Eastwood falls into the den of the black widow and her spiders. The theme of castration is outwardly expressed.

In this version, headmistress Martha is played by the wispy, haunted, out-of-breath Nicole Kidman.  Colin Firth is Corporal John McBurney. Kirsten Dunst is the plump, aging spinster who wants to escape her confining post as the teacher at the school and hopes John will save her.

The weakness of one version was the strength of the other so that trying to decide which was better was difficult. Sofia Coppola‘s outstanding effort was her directorship. Applauds all around for capturing the humid, suffocating setting of trees and brush and cicadas and for creating an authentic historical climate of 1863 even though she filmed it at Lousiana’s Madewood Plantation while the location was said to be in Virginia.  Fine, I’ll give that to her because the location made for an ideal stage. Sofia does well with costumes in her films and uses them to accentuate the personalities of her characters. In this case, her female cast wears white and it is appropriate as boarding school garb and innocence even though they are all a bit too starched and brand new for a timeworn, ragged estate three years into the war. The ending shot was outstanding. It was a daguerreotype, the outcome frozen and ghostly. White seemed to be a motif Coppola played with throughout the 90 minutes.

The 2017 film felt like a lot of short stories I’ve read over the years and loved. The ghost stories of George Eliot, Daphne du Maurier, Shirley Jackson, and Virginia Woolf come to mind. Sin is insinuated rather than fleshed out and laid on the table. (sorry) You’d get more of that from the 1971 version. While I appreciated the camera angles from Eastwood’s perspective and the manual pull in and out of the lens from Dan Spiegel, the occasional harpsichord felt like you were in a Vincent Price film. Not that that’s bad, just dated. However, the acting was much better in the 1971 version especially the “hussy” Carol played by Jo Ann Harris.

The biggest contrast between both versions was the matchup between Miss Martha the headmistress and Corporal McBurney. The 1971 version is better because of Geraldine Page. The motivating events propelled her performance to a higher, memorable plateau while validating the decisions of the others. I felt Sofia’s screenplay softened and blurred the characters. Since this is a film about relationships, Coppola’s characters paled by comparison. If you took Sophia’s directing and inserted the 1971 cast into her Southern setting, you’d have an outstanding film. As it is, I’d rate the 2017 version as a 3.5 and the 1971 version a 4. 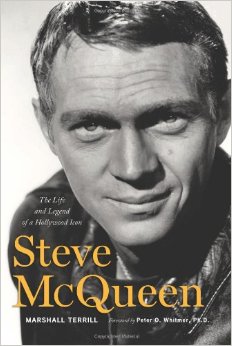 Thanks to everyone for joining me while I explored the filmography of actor Steve McQueen. The 60s and 70s movie icon had a slew of great films to his credit. Since both parents had died at age fifty, with a sardonic sense of humor, he was sure he wouldn’t pass the half-century mark. His prediction came true. He died at 50 from Mesothelioma on November 7, 1980. Breathing the asbestos filaments located in several workplaces and in his racing helmets and suits, the industrial disease raced throughout his body in the final months of his life. He never thought he’d live long. That helped explain his drive and insatiable hunger for life. He negotiated and made millions per film including a percentage of the gross proceeds. He had full control of the directors, actors, and say of his films. Most know he was stubborn and egotistical, but his generosity and kindness extended in equal measure to his two children who loved him unconditionally and to friends with whom he had established long relationships.

The Cincinnati Kid (1965) After Papillon, this would be runner up as my favorite Steve McQueen film.  Edward G. Robinson is Laney “The Man” who teaches “The Kid”(McQueen) a few lessons about life. In the game of 5 Card Stud, what are the odds two men are dealt a Straight Flush vs. a Full House? Read about THE LAST HAND here. Add Ann Margaret as the sexy temptress and Tuesday Weld as the good girl and stir in Karl Malden as Shooter, the puppet and chump into the mix. The music, the tension, and Steve convincing as “The Kid”, made it a thoroughly enjoyable film.  4.5/5

The Thomas Crown Affair (1968). Faye Dunaway and Steve McQueen are sizzling hot (It’s rated PG) in this billionaire bank caper. The split screen 60s technique, the dune buggy ride on the beach, the fashions, and that famous chess game scene full of sexual innuendos–it’s the stuff that made an Austin Powers parody possible.  It was the first time McQueen broke away from his poor anti-hero to represent the high-class anti-hero. Alone on his own plateau, this film helped cement McQueen as an icon of alpha male coolness. 4/5

The Getaway (1972). This Sam Peckinpah film flows with interesting cinematography like close-ups, the loud machines grinding in the prison interior, the chase scenes, and the interior shot of a car with BBQ ribs, food fight. While Ali McGraw‘s performance left me cold, Sally Struthers and Slim Pickens were the best characters of the movie. 4/5

The Towering Inferno (1974). It was the highest-grossing disaster movies of the seventies. They came to see the cast: Steve McQueen, Paul Newman, Faye Dunaway, William Holden, Fred Astaire, Richard Chamberlain, Robert Vaughn, O.J. Simpson, Rober Wagner, Jennifer Jones, and Susan Blakely. The star power, the escape plans, the collapse of the skyscraper was engaging enough, but it can’t compete with The Poseidon Adventure (1972), the winner of the best disaster film of the decade. It took Steve fourteen years to beat out his blonde eyed rival, Paul Newman, for top-bill, but McQueen solved the problem of leading man by having his name listed first while Paul’s would be set slightly higher.  3/5 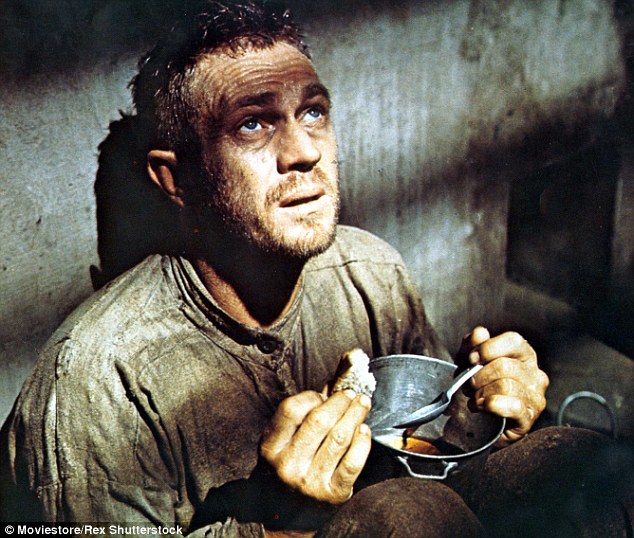 Papillon (1973). Franklin J. Schaffner was known as an innovative television director/producer in the early years of T.V. by employing film techniques within the new medium of television. He was known in the film industry for popular films like Planet of the Apes (1968), and for Patton (1970). Schaffner’s best contribution and my top prison film is the one and only classic, Papillon (1973). Listen to the Oscar-nominated score by Jerry Goldsmith. Lovely.

Almost all great films begin with great novels. Papillon (1969) was written as an autobiographical account by Henri Charrière. In 1931, he was sentenced in Paris for a crime he did not commit and exiled to a penal colony in French Guiana. Over the course of many years, Papillon, named for the butterfly tattooed on his chest, attempted to escape. Eventually, he was sent to the inescapable Devil’s Island surrounded by hungry piranhas, sharks, and crocodiles.  Henri Charrière’s story is an audacious human account demonstrating what conviction and willpower can do. His book became an instant success.

Steve McQueen gives his best performance of his career as Henri. His relationship with the inmate, Dega, played by Dustin Hoffman, is dynamic and heartfelt. It’s the cinematography that wows me. The use of black and white or the lack of sound show the solitary confinement of Papillon’s situation perfectly. When Papillon hallucinates, his dreams are horrific and the camera angles portray a true nightmare.

I find it amazing this film was not nominated for anything at the Oscars in 1974 except for Best Score which did not win. What were the contenders that year? The Sting, Serpico, and The Exorcist.  Yes, all great films, but, I still think Papillon is just as good. Certainly, Hoffman and McQueen deserved recognition for their roles. What an underrated film.5.5

“Blame is for God and small children.” – Dega