When I was in the Navy, “Radiomen” who sat in the transmitter room dialed up frequencies, turned the knobs, listened to the static, and locked in. Those out at the Receiver Tower caught the signals from the ships; sender and receiver linked, and the messages were sent. 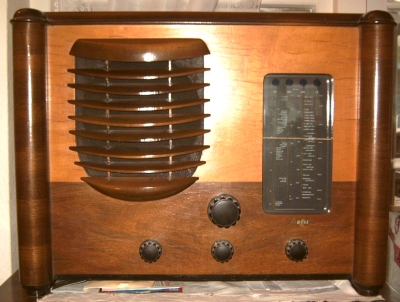 On a similar level, that’s what this remarkable historical novel is about–two youths, the transmitter, blind and aware Marie-Laure LeBlanc, who delicately probes her world with a fearless, quiet grace, and the receiver, Werner Pfenning, indoctrinated in the Nazi Youth Program, lost and crippled as he blindly receives the signals surrounding him. Anthony Doerr’s descriptive prose and poetic language carries the reader through the tumultuous years in France when the world was glued to the radio while World War II stripped away families and hope.

It is an easy read and entertaining novel with supporting characters that resonate. I haven’t loved a book in a long time, but this story, I can’t help but think anyone would like it.  However, I was surprised to read a NY Times book review from May 8, 2014 written by William t. Vollmann found HERE and his negative criticism of Doerr’s antagonist, Sergeant Major Reinhold von Rumpel, insinuating he was a cliche, too one-sided to be believed and that Doerr’s writing was lazy at times. I disagree.

When the two children finally meet, the sender and receiver connect, and the ending is satisfying. This is a Pulitzer winner I can cling to with enthusiasm. It is only a matter of time before it is made into a film. What child star could play the heroine Marie-Laure with the care that Anthony Doerr lovingly created in words?

Describing the science behind radios, gemology, and the animal kingdom with clarity and ease, this historical fiction novel is a mesmerizing page turner. 10/10.

“Open your eyes and see what you can with them before they close forever” (48).

The Shell Collector, Four Seasons in Rome, and About Grace are Doerr’s three earlier novels. I am in a rush to read them. Is there one you recommend? What did you like about All The Light We Cannot See?