My mother has cancer. In typical fashion, the salt-of-the-earth woman is facing stage four lung cancer far better than I am. I have worried and wept since October when her back pain led to an MRI, and she lit up like a Christmas tree. Red dots punctuated her lungs, her spine, and lymph nodes. I have flown to Illinois as often as work allows to assist and be a shoulder to lean on. In the end, it is I who needed consoling. My mother would have been a great Buddhist. Her motto: “It is what it is.”

I flew to Illinois to be with her last weekend. She is alone which bothers me, but she is exactly where she wants to be, in her townhouse surrounded by her favorite possessions and independent. Her routine has always been simple. Wake up at six and turn the television on for background noise. Walk the dog three times a day. Take a nap after lunch. Watch Jeopardy. Watch the news again. Eat dinner. Watch a Netflix series. Go to bed at nine. Repeat. 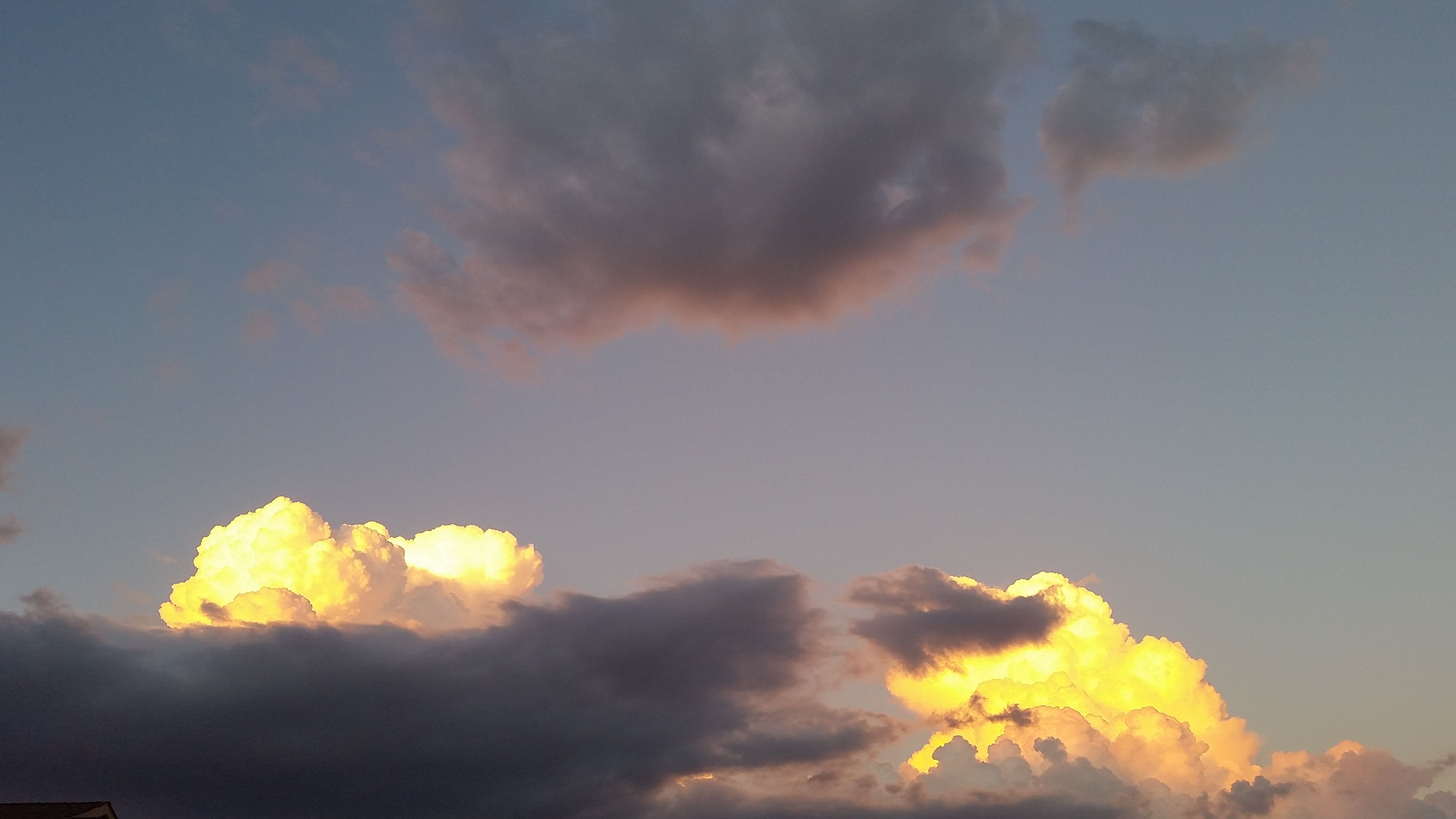 I’m shocked by how therapeutic it is to try on her routine and escape my job, my responsibilities, and my hobbies. Like water lapping on the shore, she is the moon that directs the day’s rhythm. I breathe and begin to relax in her company. We buy ice cream cones and take country drives looking for eagles. We laugh at my inability to adjust to the fancy BMW I rented (I didn’t ask for one; the cheap cars were taken and it was all they could offer me.). Our bodies creak as we try to get in and out of the thing. The speed and smooth ride were like the sprinkles that covered my chocolate cone–a sweet indulgence, indeed.

To contrast the quiet days, I downloaded Altered Carbon, season one on my phone since I heard it was great, and I like Science Fiction. Each night under my covers after Mom went to bed, I watched a couple of episodes and was impressed with the Blade Runner vibe, sophisticated worlds, and plot twists. My favorite character is Poe, who is AI and wants to be human. He provides the comic relief and is more human than anyone else in the grisly, narcissistic world of the haves and the have-nots. It is violent and for mature audiences. I’d like to read the trilogy by Richard K. Morgan for which Netflix developed the television series in 2018.

According to Forbes contributor, Paul Tassi, season two is less exciting due to budget cuts. Who knows about season three. You can read his article about season two HERE.  All I can say is season one was highly distracting from the solemn situation facing my family. It sure beats listening to the news and panicking over the Corona Virus.  I have plunged deep into creating the rough draft of my third book in a six-part series. It takes place in World War II and two major characters are Jewish sisters who find themselves in the Philippines, 1942. It’s a safe spot to be, writing about the 20th Century while watching the futuristic setting of the twenty-fifth century.

At the end of the month, the April newsletter will be sent to those who have shared their email addresses with me. You are encouraged to join them. I’ll be sharing the research and the process of writing historical fiction. E-mail me at cbruchman@yahoo.com, and I’ll add you to the list.

In German class, we are exploring German Expressionism found in film. I showed them the Fritz Lang masterpiece, Metropolis (1927). My students were born after The Matrix CGI made a leap forward. CGI has been a part of their entire lives like cell phones. To show them a silent film made in 1927, and they thought the special effects were cool, and the application of the characteristics of German Expressionism (distortion, exaggeration of human feeling, extreme contrast, horror) was fascinating; I was thrilled that after ninety years, Metropolis still captivates.

When Fritz Lang’s film came out it met with mixed reviews. Favorably, people felt the images and the production design was a character unto itself. They thought it was beautiful in a macabre way. Hence, Metropolis’s effect on future generations is undeniable. Just ask any fan of  Star Wars or Bladerunner.

I saw Ad Astra last weekend in the theater, and I left thinking I had seen a quasi-remake of Apocolypse Now. Tommy Lee Jones was Kurz. Snippets of recordings gave ambiguous meanings to his tracker. Was the fallen angel of the space program crazy and a murderer? I wish Tommy Lee’s character Clifford McBride had lines to say like Kurz:  “I’ve seen horrors, horrors that you’ve seen. But you have no right to call me a murderer. You have a right to kill me. You have a right to do that, but you have no right to judge me. It’s impossible for words to describe what is necessary to those who do not know what horror means. Horror! Horror has a face, and you must make a friend of horror. Horror and moral terror are your friends. If they are not, then they are enemies to be feared. They are truly enemies.”

Brad Pitt’s narration reminded me of Captain Willard (Martin Sheen). Narrating his long epic journey from Earth to Neptune, he questions and fears meeting his father, the man the government wants to be assassinated.

The visuals were fantastic. I’m so glad I saw it on the big screen. Like Metropolis, the production design of Ad Astra transported the individual to the future.

However, I left the theater disappointed. The execution of the storyline was bland. I wished for philosophical discussions. I thought there was too much build-up for a weak finish. I wanted more than the overused close-ups of the wrinkled faces of the two leading men. If only they shortened the journey (It was hard to believe he had traveled to Neptune) and gave more scenes to the father-son like Kurtz and Captain Willard. I thought back to Metropolis and realized once again that you can have the best special effects in the world, but without an interesting storyline, it ends up flat. I wanted a biting social commentary.

Of course, this is just my opinion. Metropolis had mixed reviews. And look how it fared over time. Got five minutes? Here, take a look at why:

Welcome back, everyone. It’s the thirteenth of the month and the Lucky 13 Film Club topic today is the purpose of Sci-Fi films. As a case study, check out this conversation I had with my 29-year-old daughter in the car on the way home from watching Blade Runner 2049 the other day.

Vanessa: Mom, when you asked me half-way through the film if I was bored, I said “no”. But then I thought about it, and yeah, I was bored. I wondered if never having seen the first Blade Runner would affect my understanding of the sequel.  This movie was so long and loud and I didn’t understand what was going on. It was just Ryan Gosling without expression either staring vacantly at females who wanted to have sex with him or kill him. What about that lackluster chemistry between him and Harrison Ford?”

Cindy: (laughing). Yeah, well, Harrison Ford has given the same performance for decades. I don’t think Deckard was ever a replicant, though. Oddly, he conveys too many emotions. He and K-Joe were father and son. I think.

V: Was the memory-maker his sister? The most intriguing scene for me was when K-Joe shared a memory into a gadget at her bubble cell, and she told him it was real, not fabricated. What the heck was the memory that brought out the only emotion in him in the whole movie? Something more important than sex and the fear of death?”

Cindy: I can only speculate. What did you think of Jared Leto‘s character Niander Wallace? I honestly thought they could have cut out his entire role. It was a ranting philosophical weak sub-plot which set up morality questions about Artificial Intelligence raised in Spielberg’s A.I. Leto was great at being weird, and his scenes added to the overall creepiness, but then, there was plenty of weirdness going on. I admit the futuristic technology was awesome in his scenes. Little black bugs that connect into your brain so the blind can see? Cool.

V: I didn’t understand Luv, the bad replicant, played by Sylvia Hoeks. Other than she was the top angel and terminator for Wallace, her job was to find the child or she’d be a fallen angel. For a while there, I thought Luv and K-Joe were brother and sister.

Cindy: I didn’t like the final showdown between Luv and K-Joe. It was flat and I was tired of the emotionless duel between the two replicants.

V: (wearily) I have never disliked a film more.

Cindy: Really? You hated it?

V: I was so uncomfortable in that film. I was trapped for almost three hours in a gray, treeless world that screeched wave after wave of engine noise and made me want to cry or kill myself if that had been my reality. I was disturbed at how women were portrayed. Either they were giant slutty naked body parts or robotic destroyers. Other than the memory-maker, the only female character who was soft and feminine wasn’t real in the first place. She was a hologram. With a remote click, she disappeared and reappeared at Officer K’s convenience.  It was twice as scary than the horror film It.

Cindy: That’s why Denis Velleneuve‘s film was so good. Good Science Fiction puts you in a futuristic setting that is often horrifying to remind you in the present to take care that the artist’s prediction for the future doesn’t come true. It was an apocalyptic horror film. The power of technology is frightening. Remember, just because we can create new gadgets and programs doesn’t mean we should. It’s becoming the new religion. Blind faith in technology, to me, is horrifying. 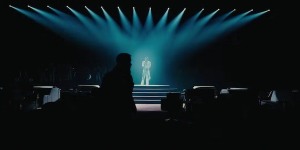 That is, except for the Deckard scenes in Las Vegas. He was stranded with a million bottles of whiskey around him and the hologram shows. If the apocalypse comes, I can’t think of a better place to hang out with me, myself, and I than at The Mirage with Elvis Presley.

V: (rolls eyes) Oh, Mother. Did you like the film?

V: I would have rather watched Wonderwoman or Thor: Ragnorak or The Justice League.

Cindy: But that’s not Science Fiction.

V: You mean it’s not Science Fiction if I’m not depressed after watching it? Must it always be so serious and thought-provoking?

Cindy: The good ones usually are.

What’s the purpose behind Science Fiction? What are the elements of it?